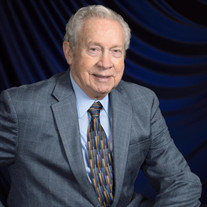 Dr. William Hutchins Roberts, Jr., age 85, of Polk City Florida passed away on December 19, 2021, at Ocala Health and Rehabilitation Center in Ocala. His new residence is in Heaven as he received Christ as His Lord and Savior during Vacation Bible School around the age of 9. He was born July 6, 1936, in Fort Myers, the son of William H. Roberts, Sr., and Bertha Roberts. In addition to his parents, he is predeceased by his wife Nancy Roberts and his sister Jeanette Osteen of Okeechobee. He also has a brother, John, whose status is unknown. He is survived by his sister, Patricia Abele of Okeechobee, four sons: William H. Roberts, III (Amy) of Ocala; Jerry L. Roberts (Karen) of Polk City; Vernon M. Roberts of Apollo Beach; and Benjamin W. Roberts (Paige) of Ocala, 16 Grandchildren: Tim (Kristen), David, Brent, Jonathan, Mary, Bradlee (Enoch), Hayley, Whitney, Richard (Tayler), Joshua, Noah, Truett, Katelynn, Emmett, Wyatt and Sam, and 4 great-grandchildren. He served 4 years in the Air Force and on his return married Nancy Carroll Fithian in Hollywood FL in 1960. They had been married for almost 59 years at the time of her passing. He graduated from Arlington Baptist Seminary in 1962. They settled in Pompano Beach, Florida, where he began his ministry as a pastor. He was the founding Pastor of Pompano Baptist Temple, (now known as Grace Baptist Church) and Highlands Christian Academy located in Pompano Beach. He was one of the original pioneers and founders in Christian education to establish a non-public school during a time the government was resistant to private education in Florida. After 14.5 years as pastor and president of the school, he saw a need and began Abundant Funds in 1973; a fundraising company created for helping Christian Schools raise much-needed funds through product sales with student incentives. He worked in fundraising for over 40 years, impacting thousands of students to strive for a strong work ethic and teaching that goals are attainable with hard work. There will be a visitation Tuesday, December 28th at 11AM at Gentry-Morrison Funeral Home at Serenity Gardens, and a service to follow at 12PM. Following service there will be food on behalf of the family served at Parkway Baptist Church, 4210 Lakeland Highland Road, 33813. There will also be a Graveside Service January 3rd at Oak Grove Cemetery at 12PM.

Dr. William Hutchins Roberts, Jr., age 85, of Polk City Florida passed away on December 19, 2021, at Ocala Health and Rehabilitation Center in Ocala. His new residence is in Heaven as he received Christ as His Lord and Savior during Vacation... View Obituary & Service Information

The family of Dr William Hutchins Roberts created this Life Tributes page to make it easy to share your memories.

Send flowers to the Roberts family.