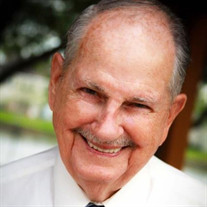 William Theodore "Teddy" Mitchell, 91, passed away at home in Lakeland, August 29, 2021. He was born in Lakeland to Wayne & Lessie Mitchell on November 23, 1929. He attended Lakeland High, then Merchant Marine school, & served in the US Navy during the Korean Conflict. Teddy met Gail during a visit home on Thanksgiving; a double-date to the Silver Moon Drive-In was their first adventure together. They wed November 7, 1953, raised their own 3 children, and loved & guided many more. They were married 63 years before Gail passed away in 2017 - the only time she ever managed to make it somewhere before he did. He was a Millwright with the United Brotherhood of Carpenters for over 50 years, working on a wide range of sites; he especially enjoyed working at Canaveral Space Center & being a part of building Walt Disney World. He enjoyed tinkering in the garage with old mechanical things, listening to classical music, singing gospel music, dining out with his wife, watching NASCAR races, airplane shows, & Rays baseball. He was a founding member & longtime deacon at Christ Memorial Baptist Church; he filled many roles & touched countless lives there as a benevolent volunteer for 5 decades. He was a dedicated follower of Christ, faithfully devoted to his wife, unconditionally loving & supportive of his family, and the sweetest patriarch there ever was. To know him was to love him. In addition to his wife, Gail McClelland Mitchell, he was preceded in death by his parents, Wayne & Lessie (née Nall) Mitchell; son, Lowell W. Mitchell; & brother, Lowell G. Mitchell. He is survived by his daughters, Denise Selby & Lynn Felts, both of Lakeland; grandchildren Lisa Merrill, Merita Reyes, Tamara (Stephen) Smith, Byron (Darcy) Felts, & Beverly (Gary) Mershon; adoring great-grandchildren Lauren, Summer, Layla, Nick, Charli, Skylar, Ryder, Kinleigh, Jason, & Wesley; sister-in-law Vertie McClelland; brother-in-law Terry Moon; nephews Buddy, Mike, Greg, & Patrick; nieces Brenda, Sandra, & Karen; & a whole bunch of great-nieces & great-nephews. The family kindly suggests memorial donations to Cornerstone Hospice or Christ Memorial Baptist Church.

William Theodore "Teddy" Mitchell, 91, passed away at home in Lakeland, August 29, 2021. He was born in Lakeland to Wayne & Lessie Mitchell on November 23, 1929. He attended Lakeland High, then Merchant Marine school, & served in the US Navy... View Obituary & Service Information

The family of William Theodore "Teddy" Mitchell created this Life Tributes page to make it easy to share your memories.

William Theodore &quot;Teddy&quot; Mitchell, 91, passed away at home in...

Send flowers to the Mitchell family.