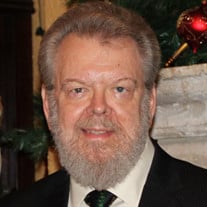 Wesley Edward Lahey, 77, finished his life’s journey on Monday, November 7, 2021 at his home in Lakeland, FL. Born December 28, 1943 in Nashville, TN where his father, Wesley R Lahey and mother Sarah Schuster-Lahey were initially stationed during WWII. They returned to their home city of Pittsburgh, PA when he was very young where Wes attended school and church in the North Hills area through high school. He became an electrical designer and married the love of his life, Marie T “Terrie” Petrak-Lahey in 1966. Together they had one daughter, Heather L Lahey-Jeffries. After working several locations around the US on large design projects, the family chose to relocate to Lakeland, FL where Wes was part of the design teams for numerous projects over the next 43 years including Disney’s Animal Kingdom, Disney’s Lights, Motors, Action!: Extreme Stunt Show, Disney’s Epcot Center, Florida Power and Light, US Army Corp of Engineers, Georgia Paper, Lockheed Martin and Martin Marietta. His last working years were with JH Ham Engineering, Lakeland, FL. Wes also had a tremendous love for classic cars, Harley Davidson and Triumph motorcycles. He passed that enthusiasm on to his daughter and grandson, Noah Jeffries. He had an interest and excitement for strength training and fitness, sharing that with his family as well. Wes had a way of making the things he was passionate about enjoyable and intriguing for those around him. While some may have thought he was quiet and serious - in truth he had a youthful enthusiasm his entire life, with a memorable smile, terrific laugh and great sense of humor. Beyond his commitment to his career and job done well, Wes possessed tremendous honor, integrity, loyalty and strength of character as a person. To his family he embodied the greatest example of what it meant to be a husband, father, grandfather, brother, son and friend. He lived his life dedicated to his family and their well-being. He loved deeply in his quiet demeanor, stood by people till the end and never gave up nor quit. Always helpful, kind and respectful of others, he leaves a legacy of the truest definition of nobility and goodness. Those who are his surviving family and friends now carry those facets he shared by having witnessed how he lived his life. He is survived by his wife, Terrie and daughter, Heather, son-in-law, Bud Jeffries. His youngest brother; Frank Lahey and Joyce Anne Von Vrecken, brother and sister in-laws; Richard and Jan Petrak and sister-in-law; Rosemary Lahey as well as friends and colleagues. Wes is preceded in death by his father, Wes and mother, Sarah, mother-in-law; Mary G Petrak, younger brother; Mark N Lahey, younger sister; Anitra J Lahey as well as his grandson Noah. Also to have gone on before and so greatly missed by him, they must be mentioned – Wes and Terrie’s dogs; Duke, Winky, Jake and Toby.

The family of Wesley Edward Lahey created this Life Tributes page to make it easy to share your memories.

Send flowers to the Lahey family.