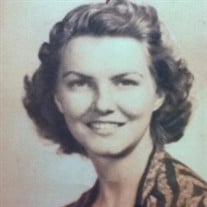 Wanda Ruskjer (maiden name Gibson) was born on September 29, 1923 in Washington, D.C. A lifelong Seventh-day Adventist, Wanda passed to her rest in Lakeland, Florida on August 2, 2020. She was 96 -- less than two months from her 97th birthday. She is survived by two of her three sons: her middle son, Ronald Edwin Ruskjer of Houston, Delaware; and her youngest son, David Eugene Ruskjer of Lakeland, Florida. Her oldest son, Robert Leslie Ruskjer of Apple Valley, California, passed in 2001. She is survived by nine grandchildren: Robert Leslie’s children: Jennifer, Szablis, David Andrew, and Simeon; Ronald Edwin’s children: Donovan and Charles; and David Eugene’s children: David John, Peter, and Christopher, as well as numerous great-grandchildren. Wanda is survived as well by five nieces: her sister Marjorie’s daughter, Sharon, and her brother Elvin’s daughters: Coral, Audrey, Lynn, and Yvonne. She is also survived by her devoted sister-in-law, Susan Gibson Theobald, Elvin’s widow and the girls’ mother. Wanda’s first husband, Edwin Leroy Byrd (father of Robert Leslie, Ronald Edwin, and David Eugene) and her second husband, Donovan Latimer Ruskjer (with whom she had no children) preceded her in death; Edwin Leroy passing in 1967 and Donovan Latimer in 1990. Wanda was employed for nearly three decades by the United States Government, serving first as a secretary with the Civil Defense Department, then as a Cobol computer programmer, and finally as a systems analyst with the Defense Logistics Services Center in Battle Creek, Michigan. She was an accomplished poet, photographer, painter, and stained glass artisan, as well as an avid pet lover through the years -- letting dogs, cats, birds, fish, squirrels, chicks, and geese enrich and enliven her home. Like her father, Wanda became a highly regarded Sabbath School teacher, sharing biblical insights with her many students, both in Battle Creek, Michigan and later in Lakeland, Florida. Wanda’s wish was to be buried at Oak Hill Burial Park in Lakeland, Florida, where, beside her late husband Don, she would “await the coming of the Lord on that grand day of glad reunion.” A Memorial Service will be held at Lakeland Seventh-day Adventist Church at 11:00 AM today (Friday, October 2, 2020).

Wanda Ruskjer (maiden name Gibson) was born on September 29, 1923 in Washington, D.C. A lifelong Seventh-day Adventist, Wanda passed to her rest in Lakeland, Florida on August 2, 2020. She was 96 -- less than two months from her 97th birthday. She... View Obituary & Service Information

The family of Wanda Ruskjer created this Life Tributes page to make it easy to share your memories.

Send flowers to the Ruskjer family.