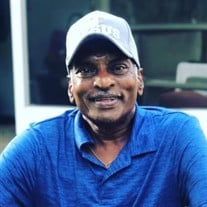 Lakeland,FL - Vincent Anthraj Michael, 66, passed away on February 12, 2021. Mr. Michael was born in Mumbai, India on March 9th, 1954, son of the late Anthraj and Uttriamarie Michael. He was preceded in death by his brothers Harry Michael, Arokenadan Michael, Anthony Michael and his sister Arica Spry-Harris. He is survived by his wife, Natalina Michael, his five children, Jennifer (Bobby), Mary, Anthraj (Sarina), John (Heather) and Paul (Talia) Michael, his two sisters, Anna Ponnudurai and Rosemary D’Cunha, his seven grandchildren; Sanaa, Kayla, Ramaya, Johnnie, Naveena, Maalani and Amila and great grandson, Kingston. He immigrated to Norfolk, VA in 1974, he returned to India to marry the love of his life Natalina Michael in 1977 and then returned to VA where they started their family. Eventually, he moved to Lakeland, Florida in 1998 and joined St. Anthony’s Parish. Mr. Michael was a devout Catholic, who spread the word of the Lord everywhere he went with a mission to lead others to love and serve the Lord. He made a lasting impression on anyone who had the opportunity to meet him. He was filled with love and compassion, and willing to lend a helping hand to anyone. He was an Auto Mechanic by trade that had a deep passion and appreciation for cars. His dream and vision was fulfilled in 2012, when he founded All United Automotive in Plant City, FL. He enjoyed listening to music, dancing, sharing his life experiences and spending time with his family and friends. Please join the family for Mr. Michael’s viewing from 6:00 – 8:00pm on Thursday, February 18, 2021 held at Gentry-Morrison Funeral Home, 3350 Mall Hill Drive, Lakeland, FL 33810. A funeral mass is scheduled for 11:00am, Friday, February 19, 2021 at St. Anthony’s Catholic Church – 820 Marcum Road, Lakeland, FL 33809. Burial Service will be held immediately after the funeral at Hopewell Memorial Gardens, 6005 County Road 39 South, Plant City, FL 33567.

Lakeland,FL - Vincent Anthraj Michael, 66, passed away on February 12, 2021. Mr. Michael was born in Mumbai, India on March 9th, 1954, son of the late Anthraj and Uttriamarie Michael. He was preceded in death by his brothers Harry Michael,... View Obituary & Service Information

The family of Vincent Anthraj Michael created this Life Tributes page to make it easy to share your memories.

Send flowers to the Michael family.