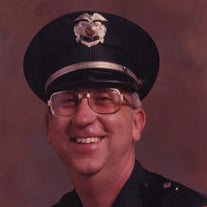 Lakeland - Thomas August Thonebe 85 was reunited in heaven with the love of his life Judy on March 30, 2021. He was born on November 16, 1935 to Margaret Helen Beal & August Thonebe in Hempstead, NY. He moved to Lakeland, FL as a young boy. He received diplomas from Lakeland Sr High School, Polk Community College, and St. Leo University. He was twelve credit hours shy of receiving his master's degree in Criminal Justice from Rollins College. Throughout his college years he remained on the Dean's honor roll. Thomas met his wife Judy of 63 years in ninth grade, after high school graduation they married on Sept 2, 1955 and began their married life. He joined the Army National Guard in December of 1952 and served for eight years. In July of 1961 he began his career as a City of Lakeland Police Officer, where he was a Sergeant and later on promoted to Sr Sergeant. During his time with LPD he trained with the FBI in Hostage Negotiation & Civil Defense in Radiological Monitoring & Hazardous Waste Operations & Emergency Response. As a LPD officer he was very involved and cared deeply for the community and citizens of Lakeland which he served proudly. Thomas retired from LPD in June of 1990 after serving with great pride & dedication for 30 years. After retiring from LPD he worked as a security officer at Lakeland Regional Medical Center from 1994-2010. He became a crossing guard for the Polk County Sheriff's Department in January 2014 until his death. He was a member of First United Methodist Church, Perpetual Member of Masonic Lodge Polk #345 F. & A.M. & Lakeland Lodge # 91, Scottish Rite, YorkRite, Egypt Shrine Temple, & Lakeland Elks Lodge #1291. He served proudly as a Scout Master of the Crystal Lake area and was VP of Lakeland High School Football Booster Club from 1982-1984. He was preceded in death by his parents and his loving wife Judy passed in May of 2019. He is survived by his loving family, children, Douglas Thonebe (Lisa), Cheryl Thonebe Whitt (Eric}; grandchildren, Kristin Thonebe Brockman (Jayme) Kody Thonebe; great granddaughter Madison; sister- in- law Rosemary Haworth. Along with many nieces, nephews, cousins and loving friends.

Lakeland - Thomas August Thonebe 85 was reunited in heaven with the love of his life Judy on March 30, 2021. He was born on November 16, 1935 to Margaret Helen Beal & August Thonebe in Hempstead, NY. He moved to Lakeland, FL as a young boy.... View Obituary & Service Information

The family of Thomas Thonebe created this Life Tributes page to make it easy to share your memories.

Lakeland - Thomas August Thonebe 85 was reunited in heaven with
the...

Send flowers to the Thonebe family.