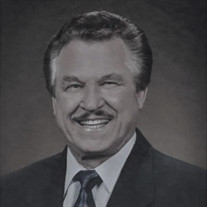 Thomas William Adams peacefully passed into the arms of his Lord and Savior at his home in Lakeland, Florida on August 13, 2020, surrounded by his family and friends. He was born on January 18, 1936 in Ocala, Florida to Albert Sidney Adams, and Pauline Howard Adams. He spent his childhood between Florida and Georgia with his parents and beloved Uncle Lee (Motors) and Aunt Ezelle. Tom was enlisted in the US Navy in 1954 where he served as a teletype operator. After leaving the Service in 1963, he was employed in management and construction sales. He retired from Home Depot in 2001. He was an active member of Victory Church. He loved to travel and toured the European continent with his wife Barbara on several occasions. He was an avid sports fan and enjoyed hunting, fishing, boating, and especially golfing. Tom also loved to watch old western movies with his faithful “fur”baby companion Pollyanna by his side. Tom is survived by and will forever be cherished in the lives of his wife of 38 years, Barbara J. Adams, his three children; Rocky White (Joyce), Melony Gaffney (Barry), Macara Parker (Jason), and two step-children; Pamela Blinebury (Herb), and Terry Mills (LeighAnn), his 10 grandchildren; Ryan Lee, Kyle Lee (Miranda), Clay Parker, Cassie Harrell (Jason), J.A. Martin, Jr (Sunnie), Erica White, Lance Aleman, Paige Albrechta (Tom), Kristin Mills, and Kameron Mills, and six great-grandchildren; Olivia, Grayson, Maverick, River, Pruitt, and Pierce. He is also survived by his siblings; Eunice Smith, Harriet DiCesare, Ann Lain (Donald), Jack Adams (Pam), Ethel Frampton, and Pete Adams (Suzanne), and his sister-in-law Bettie Walker, who lovingly cared for him. He is also survived by the mother of his children Jeanette Wells, and the apple of his eye, his “fur” baby Pollyanna. He was preceded in death by his parents, beloved son Jerry “Clay” Adams, and brothers; Paul, Lee, Frank, and Rick. A memorial service will be celebrated at 2 pm Saturday, September 19th at Victory Church, 1401 Griffin Rd, Lakeland. The family will receive friends prior to the service beginning at 1:30 pm. In lieu of flowers, donations may be made payable the SPCA Florida Adoption Center, 5850 Brannen Rd S, Lakeland, FL 33813.

Thomas William Adams peacefully passed into the arms of his Lord and Savior at his home in Lakeland, Florida on August 13, 2020, surrounded by his family and friends. He was born on January 18, 1936 in Ocala, Florida to Albert Sidney Adams,... View Obituary & Service Information

The family of Thomas William Adams created this Life Tributes page to make it easy to share your memories.

Thomas William Adams peacefully passed into the arms of his Lord...

Send flowers to the Adams family.