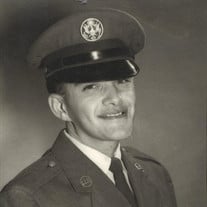 Terry Malcolm Lennox was born on October 30, 1940, in Canton, Ohio, and passed into eternity on December 29, 2021. A true Scotsman to the core, Terry was a faithful husband to Candace, and proud father and grandfather to Stacy, Brian, and Jacob. He loved Jesus, America, and was a Vietnam Veteran who served in the Air Force. He so loved his sister Susan, niece Beth, and nephew Rob, whom he considered like a son. Terry enjoyed the company of his favorite Auntie and Uncle, Nancy and Larry Huff, who live nearby. In 1975, Terry became sick of the cold Canton, Ohio winters. He packed all of his worldly possessions into a bread truck and moved his family to sunny Florida. A choice he never regretted. He spent several years in Vero Beach, where he began working as a flight instructor for Flight Safety International. He later transferred to Lakeland and retired as the Director of Maintenance Training after 32 years with the company. Terry enjoyed airplanes, cars, guns, eating out with friends, and watching Joyce Meyer on the computer every day to feed his soul. He spent many, many years driving his Stars & Stripes MasterCraft while pulling future waterski champions. Terry's other prized possessions included a Harley Sportster and a 1999 Ford Mustang SVT Cobra, which he restored himself over the past year. Though age slowed him down in the end, he could be seen zipping around the neighborhood on his "SwagCycle" scooter while walking his beloved dog Bailey. In his final year, he lived next door to his daughter on beautiful Lake Haines in Lake Alfred. Terry lived a good life and will be missed by those who loved him. On Saturday, February 12 at 2:00pm, a memorial service will be held at Gentry-Morrison Funeral Home (Southside Chapel), 1727 Bartow Road, Lakeland, FL 33801. Masks will be required to be worn inside the chapel. A short lakeside gathering with a Veteran's Tribute flight, coney dogs, beer, and fireworks will be held afterward at 5:00 pm (weather permitting) at 900 Mosley Road, Lake Alfred, FL 33850. Family and friends are welcome to attend one or both.

Terry Malcolm Lennox was born on October 30, 1940, in Canton, Ohio, and passed into eternity on December 29, 2021. A true Scotsman to the core, Terry was a faithful husband to Candace, and proud father and grandfather to Stacy, Brian, and Jacob.... View Obituary & Service Information

The family of Terry Malcolm Lennox created this Life Tributes page to make it easy to share your memories.

Send flowers to the Lennox family.