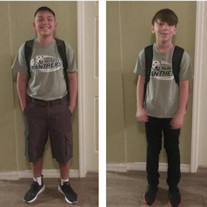 On August 26th, 2020 two brothers tragically lost their lives as victims of a violent crime. Tayten Scott Baker (June 12, 2006) and Robert Andrew Baker (September 18, 2007) were just beginning a new chapter of their lives. Their parents recently purchased a home in Melrose and moved from Lakeland so they could be closer to their large extended family. These brothers were so excited to be surrounded by family and cousins. Tayten, age 14, was always a happy kid. He never spoke without smiling and he lit up the room with his face and voice. He was a gentle soul with a heart of gold who made friends with everyone he met. He loved playing with and taking care of his youngest brother and helping anyone who needed it. He enjoyed cooking, listening to music, swimming, and playing outside. He was looking forward to camping trips with his family, starting a new school, and playing football. Robert, age 12, was extremely smart and very athletic. He excelled at nearly everything he did. He was a ‘straight A’ student who was offered several scholarships to private schools, but always turned them down because he wanted to stay with his big brother. He loved playing video games, fishing, and playing baseball. He had a special connection with animals and nature and was looking forward to the many fishing trips planned, now that he lived closer to his poppa. The Baker Brothers are survived by their parents Chad and Sarah Baker, little brother Landon Baker and 2 older brothers Kolton and Kolby Baker. The paternal grandparents Bob and Daphne Baker, and Aunt Misti. The maternal grandparents Andrew Benson and Deborah Benson, their children Adam, Nathan, and Andrew Benson. Their Aunt Amy and Uncle William Stills, and son William Stills. Their Aunt Cynthia Guinan and daughter Kaitlyn Wilson. Their grandmother Lorelei Guinan and great grandmother Bettysue Hall, along with numerous other aunts, uncles, and cousins. They are predeceased by their Aunt Andrea Benson. The loss of these boys has shattered our family and the community. A Celebration of Life will be held for the brothers on Saturday September 5th at 1pm. The service will be performed at Living Hope Family Worship Center at 1109 FL – 100 in Florahome. Masks will be required. The family respectfully requests that media outlets allow them privacy in their time of grief. Any flower arrangements can be sent to Living Hope starting at 10am on Saturday. Financial contributions can be made to the family's GoFundMe account https://www.gofundme.com/f/funeral-for-kolton-and-kolbys-brothers?utm_source=facebook&utm_medium=social&utm_campaign=p_cp%20share-sheet&fbclid=IwAR3e5fXx-I6xN8czmicPNjeTa_uIyyNAor5ET32GL9z62WiaxRZ_FpMMu9s

The family of Tayten & Robert Baker created this Life Tributes page to make it easy to share your memories.

Send flowers to the Baker family.