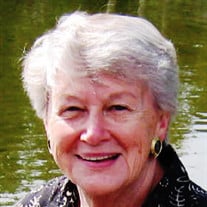 Shirley McConnell Utzman, 90, died Mon, Aug 23, 2021 at the Good Shepherd Hospice in Lakeland, FL. Shirley was born March 25, 1931, to Danish immigrant farmers, Bertel and Marie Petersen in Taylors Falls, MN. She was the youngest of eight children, and her early life was spent in several communities, including Milltown, WI, Balsam Lake, WI, St. Croix Falls, WI, and St. Paul, MN. She graduated from St. Paul Central High School in 1949, and attended Westmar & Macalester Colleges for one year each before her marriage to Rev. Harold Earl Utzinger in 1951. She took a break from her education to raise her two sons Michael & Mark, who were born in 1954 & 1958. Shirley was very active as a pastor’s wife during her husband’s early career. One of the highlights of this time was a 16-month tour-of-duty in Fukuoka, Japan, while Harold was a Chaplain in the U.S. Air Force. After returning from Japan in 1958, she and Harold settled in Eyota, MN, and three years later Shirley earned an Associate's Degree at Rochester Junior College. The family moved from there to Cambria, MN, and she went on to earn a Bachelor's degree in Social Studies at Mankato State University in 1964. Following another move to Marshall, MN in 1965, Shirley started her work career as a Social Studies & American History teacher in the Marshall Public School system, and eventually became a supervising social worker at the Lyon County Welfare Department, a position which she thoroughly enjoyed. Shirley was an early women's rights activist, and a group of local women convinced her to run for an opening on the all-male Marshall School Board in 1972. She won that hard-fought campaign, and was the first woman elected to that position. She went on to become the Lyon County Chair of the Countryside Council, a community action organization funded by the Kellogg Foundation, and she was eventually awarded a Bush Leadership Fellowship for that work. After her first marriage ended in 1979, Shirley moved to Minneapolis, MN, and used that Fellowship to earn a Master's degree in Public Administration at the prestigious Hubert H. Humphrey Institute of Public Affairs (U of Minnesota). She also served on the Committee on Aging for the Metropolitan Council and did work for the Women’s Consortium. Shirley closed out her working career as Director of Welfare Services for Dakota County, located just south of St. Paul, MN. This was a very challenging position since she was in charge of over 120 social workers in this large metropolitan department. Fortune smiled on Shirley in 1983 when she met & married Nicolas McConnell. She enjoyed five happy years with him before his death in 1988, and remained a devoted step-mother and step-grandmother to his children and grandchildren. Shirley retired in 1987, and eventually moved year-around to her cabin on Lake Hubert, near Nisswa, MN. She became very active in the progressive First Congregational United Church of Christ in Brainerd, MN, and volunteered for many activities in the community. She served as a board member for the Rosenmeier Center at Central Lakes College for ten years, mentored local students there, and worked as a tax counselor for AARP. She was also a big supporter of the League of Women Voters, and was elected President of her local chapter on more than one occasion. Single for many years, Shirley was happy to reunite with a teenage acquaintance, Donald Utzman in 2010, and their courtship led to marriage in June of 2012. They spent nine loving years together, enjoying winters in Lakeland, FL, and summers at Shirley’s Lake Hubert cabin. Beginning in the Fall of 2019, both resided year-around at Don’s comfortable home in Lakeland, FL. Shirley is preceded in death by her: parents, Bertel and Marie Petersen; husbands, Harold E. Utzinger & Nicolas McConnell; brothers, Herloff, Holger, and Howard; and sisters, Pearl, Opal, Ruby, and Fern. She is survived by her: husband, Donald K. Utzman; son Michael Utzinger and his wife Carolle; son Mark Utzinger and his wife Miho; 3 grandchildren, Kaye, Mari, and Anne; 4 step-grandchildren, Cole, Louise, Drew, and Brooke; and 4 great-grandchildren, Lynn, Rick, Leo, and Nao. Shirley is also survived by many other loving family members and devoted friends. A memorial service will be held at the First Congregational United Church of Christ in Brainerd, MN on Sat, Sep 18th at 11:00 AM.

The family of Shirley McConnell Utzman created this Life Tributes page to make it easy to share your memories.

Send flowers to the Utzman family.