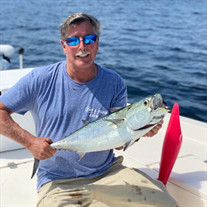 Ronald (Ronnie) Lester Thompson, of Lakeland Florida, passed away on September 4, 2021. He was the son of Maxwell Everett Thompson, Helen Waychoff Litton (deceased), and step-son of Janice Thompson. He is survived by his wife of 31 years, Morag Thompson, step-son, Brian Wilson and daughter-in-law, Jen Wilson. Ronnie leaves behind 7 siblings, a twin brother Donald Thompson, Tommy Thompson, David Thompson, Greg Thompson, Carolyn McCoy, Vicky Crenshaw, and Angela Brunelle, as well as 20 Nieces and Nephews. Ronnie grew up in Bartow Florida and spent his high school years in North Carolina then returned to Florida, residing his adult life in Lakeland. Following high school, he was employed by W.R. Grace as a power lineman for the phosphate mines. Thereafter, he was employed with Lakeland Electric as a lineman. In 1984, he met and married the love of his life, Morag Thompson and became a father to his step-son, Brian Wilson. Ronnie loved his career as a lineman but, in 1997 he was electrocuted while working on a power line and sustained severe injuries to the majority of his body. He was extremely tough and beat the odds, recovering from those catastrophic injuries. He remained employed in the engineering department at Lakeland Electric until he retired in 2018 after a 32 year career with that company. Ronnie was an outdoorsman, enjoyed hunting, fishing, wood-working, motorcycles, scuba diving and was a modern-day cowboy. From 1996-2007, he owned a horse farm with his wife, boarding quarter horses. He lived an honest life of integrity, strong work ethic and always giving even, when he had little. On July 31, 2021 Ronnie and Morag left for a long-desired cross-country camping trip. They were able to see many natural wonders and beautiful land marks across America. He contracted and overcame COVID-19 about 3 weeks into their trip. On August 28th, Ronnie was admitted to a hospital in Albuquerque, New Mexico with multiple blood clots in both lungs. He initially started to improve, but then aspirated, went into shock, was found to have multiple strokes, ultimately giving up his fight on September 4th, 2021. Ronnie was a wonderful Christian man, who touched many lives with his kindness, selflessness and genuine concern for others. He leaves behind countless friends, having never known a stranger. He attended Victory Church and in lieu of flowers the family requests donations be made to Victory Church Missions Program. Please keep our family in your prayers as we heal. Ronnie will always be loved and greatly missed. Donations: Victory Church Missions Group www.VictoryLakeland.onlinegiving.org/donate In the Donations pull down, select Missions Program On the gift line type Ronald Thompson. Funeral Details: Friday September 17, 2021 Gentry-Morrison Funeral Home at Serenity Gardens 3350 Mall Hill Drive Lakeland, Florida 33810 #863.858.4474 Viewing: 9am - 10am Service: 10am - 11am Graveside: 11am - 12pm

Ronald (Ronnie) Lester Thompson, of Lakeland Florida, passed away on September 4, 2021. He was the son of Maxwell Everett Thompson, Helen Waychoff Litton (deceased), and step-son of Janice Thompson. He is survived by his wife of 31 years, Morag... View Obituary & Service Information

The family of Ronald (Ronnie) Lester Thompson created this Life Tributes page to make it easy to share your memories.

Send flowers to the Thompson family.