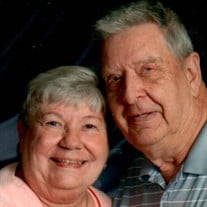 Ronald Dean Shultz and Lois Frances Whitmyer Shultz are reunited in heaven. Ronald was born September 2, 1936 in Hedrick, Iowa to Chalmer and Ruth (Miller) Shultz and died November 16, 2020 in Lakeland, Florida. Lois was born April 28, 1938 in Prophetstown, Illinois to Gaylord and Lillian (O’Dell) Whitmyer and died April 1, 2022. Ron met Lois in Illinois. Two days after she graduated from high school these soulmates were married on May 28, 1955. Ron enlisted in the Army and was stationed at Ft Gordon in Augusta, Georgia, where their daughter Nanette Elizabeth was born. After discharging to return to help with the family farm, their son Garry Lynn was born in Geneseo, Illinois. Ron worked for and retired from Prudential insurance after many years of employment. Lois worked as a Lab Technician for Lutheran Hospital in Moline then worked at Franciscan Hospital in Rock Island, Illinois. Ron and Lois moved to Florida in 1978 to start a new chapter in their life. Ron continued selling insurance and Lois started working at People’s Bank in the Loan Department. Once the bank was sold, Lois worked for Tidwell Urethane Foam. In searching for a way to expand and enjoy his hobby, Ron came across the Lakeland Rifle Pistol Club (LRPC) in 1979. Ron and Lois joined the club pursuing their love of shooting and 10 years later Ron took on the task of overseeing and organizing the gun shows for the club. He held the office of President for the 1992-93 term. Later, Lois held the office of President for 3-consecutive terms. In turn, this started Ron’s love of educating children on how to shoot correctly and safely. He taught the local youth groups of JROTC from the area high schools and instructed youth at the Junior Olympic Games. Lois assisted by scoring the matches and assisting with miscellaneous activities that needed to be done to make these events successful. In 1993, Ron retired from selling insurance and resigned as the President of LRPC to become the administrator of LRPC. Ron and Lois were both Life Members of Lakeland Rifle Pistol Club. While working as the Administrator, Ron learned about the Polk Senior Games when they inquired about holding trap shooting events at the LRPC range. Ron was a Board member and President of the Polk Senior games at the time of his death. Lois was by his side supporting and assisting with these events and was also a Board member of Polk Senior games at the time of her death. Lois was a member of Eastern Star in Illinois for over 50 years and continued her membership while living in Florida. In 1992, Ron became a Free Mason of the Grand Lodge, a 32nd degree Mason of the Scottish Rite and an Egypt Shriner. They had 65 years together filled with love and compassion. There was never a dull moment with them around and YES, they were both always packin’! Their humor, their wisdom, their love of family and country was genuine and never questioned by anyone. They never knew a stranger, befriended everyone and would gladly help anyone who needed it. They also had the support and are survived by their daughter Nanette Shultz Cavins Clark and son Garry Lynn (Claudia) Shultz. Ron is survived by two brothers, Duane (Shirley) Shultz and Marvin (Barbara) Shultz. Lois is survived by an uncle, Leland O’Dell. They are also survived by 2 granddaughters, Sara and Anna Cavins and two great grandchildren and many nieces, nephews and cousins. To honor these two, who helped so many throughout the years, the family would suggest memorial donations to the Polk Senior Games, a private, non-profit organization. Website: www.polkseniorgames.org. Email: [email protected] Polk Senior Games 515 East Boulevard Street Bartow, Florida 33830 Attention: Deena Wilber, Executive Director Phone: 863-533-0055

The family of Ronald D. & Lois F. Shultz created this Life Tributes page to make it easy to share your memories.

Send flowers to the Shultz family.