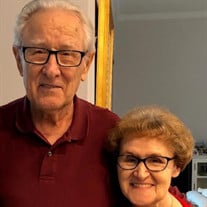 Roger & Ethel Nemeth Roger and Ethel Nemeth of Lakeland, FL, both 85 years of age, passed away on July 20, 2020. Roger was born in Hungary on December 15, 1934. Ethel was born in Phoenixville, PA, on March 4, 1935. They met in Phoenixville, fell in love, and married on July 30, 1960. They had been inseparable for 60 years and remain so in death. Ethel worked at the West Co. for many years and helped Roger learn English, find work and encouraged him to continue his education to become a computer programmer. They lived and worked in Phoenixville and surrounding areas until 1997 when Roger retired from Wyeth Labs and they moved to Lakeland, FL. Ethel was an amazing homemaker, known for her skills in the kitchen and how she put an artistic spin on all she did. She loved working in the garden, crafting and embroidering. Her creativity inspired everyone around her, and her inquisitiveness, positivity and warmth made her a cherished member of her community and with her philanthropic organizations. Roger had a green thumb and his fruit trees and vegetables gave Ethel an abundance to jar and can. He was an avid golfer and saw just as much success on the green, where he once hit a hole-in-one. His family loved his jokes and stories, always delivered in a stoic fashion followed shortly after by his trademark belly laugh. He was a man of few words, but he knew how to use them well. Between Roger’s and Ethel’s talents, their landscaping was the envy of other gardeners. They enjoyed making their world a more beautiful place. Both were wonderful and loving parents and grandparents, imbuing on those who knew them their ethics of working hard, following passions and keeping life fun. Their greatest joy was in teaching and being with their grandchildren, and witnessing each joyous event of their lives. They both enjoyed participating in the Hungarian church they attended in Pennsylvania and in Florida. Roger and Ethel join their son Michael Nemeth in death. They are survived by their daughter and spouse, Bridget & Wayne Lieberman, and their grandchildren, Meric & Vanessa Lieberman, Brianna Lieberman and Kira Lieberman. Roger is survived by his sisters and their families: Zsuzsi and Denny Kazlauskas, and Elizabeth McGusty. Ethel is survived by her siblings and their families; Steve and Rosalee Varady, Margaret Sturdevant, Louise and Claudio Fortunato, and Mary Varady. Many cousins remain in the extended family, too numerous to name, of siblings who have passed on. They were loved dearly by everyone who met them and we were blessed to have had them in our lives. Services will be held once it is safe to travel to Phoenixville. In lieu of flowers, please donate to a charity of your choice.

The family of Roger R Nemeth created this Life Tributes page to make it easy to share your memories.

Send flowers to the Nemeth family.