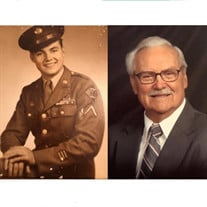 Robert Daniel Sumner, Jr., a veteran of World War II passed away on July 18, 2021 surrounded by his family. Bob, as he was known by his family and friends, was born in Okeechobee, Florida on December 27, 1924 to Robert Daniel Sumner, Sr. and Clifford Mary Sumner (Bradley). He attended Lakeland High School before enlisting in the U.S. Army. He served in France where he was wounded. The U.S. Army recognized him for his honorable service with a Purple Heart. After the war, Bob returned home and met and married the love of his life, Letha Marie Wells, on January 25, 1947. They were married for 62 years. Together they had four children, Dennis, Phyllis, Wayne, and Timmie. He was an avid sportsman who enjoyed hunting and fishing. He passed this passion on to his children, grandchildren, and great grandchildren. Together as a family they were active members of the Lake Wire Church of God. Bob served on the Church and Pastor’s Council, as the Sunday School Superintendent, an usher, and was a member of the Board of Trustees. If the doors were open they were there. He worked for various contractors before starting a construction business with his brother-in-law, Leroy Wells. After a while he started his own construction business that he ran until he retired. Bob was preceded in death by his wife, Marie, his son Dennis, his parents, and thirteen siblings. He is survived by his daughter, Phyllis Clark (Ray), his sons Wayne (Nona) and Timmie (Tracy), 18 grandchildren, Rich (Adelle), Jason (Michele), Chris, Sylvia, Jeremy (Angie), DeWawn, Ryan (Dinah), Adam (Geneva), Daniel (Lauren), Scott (Krista), T.J., and 16 great grandchildren Richie, Peighton, Chloe, Tessa, Cody, Maggie, Kaydee, Clayton, Dillan, Riley, Abigail, Logan, Alyssa, Jack, Barrett, and Aiden. The family will receive visitors from 6-8 p.m. on Friday, July 23 at Gentry Morrison Funeral Home (3350 Mall Hill Drive). A funeral service will be held on Saturday, July 24, 2021 at 9:00AM at Together Church (6725 N. Socrum Loop Rd., Lakeland, FL. 33809) including a graveside service where he will receive full military honors. In lieu of flowers, the family has requested donations to Vitas Hospice or the VFW, American Legion Post 8.

The family of Robert Daniel Sumner Jr. created this Life Tributes page to make it easy to share your memories.

Send flowers to the Sumner family.