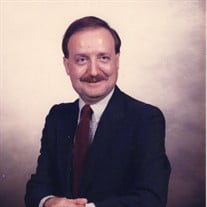 Robert B. (Bob) Storts, 84, was called to his Heavenly home on March 28, 2021. He was born on March 22, 1937 to Arthur and Mary(Berry) Storts in Midway (Sedalia), Ohio. Bob graduated from Kenton High School, Kenton, Ohio in 1956. He attended Ohio Northern University in Ada, Ohio, where he graduated with a BSc in 1960 and was a proud lifetime member of Sigma Phi Epsilon fraternity. He graduated from Bowling Green State University, Bowling Green, Ohio with an MA in 1966. Bob taught school in Lucas County, Ohio from 1960 to 1964. He entered U.S. Government Service in 1964 and for the next 30 years he served in a civilian capacity for the Department of the Air Force. Bob worked at Wright-Patterson AFB, Ohio; Andrews AFB, Maryland; and Randolph AFB, Texas. His final assignment was at the Pentagon in Washington, DC, where he retired in 1994. During his career he received two Meritorious Service Awards for cost savings in new aircraft development programs. Bob and his wife Linda were married in 1985 and enjoyed 36 happy years together. They moved to Lakeland in 1995. Bob was a member of Christ Lutheran Church where he served as an Elder for many years. He was a former volunteer at the Sun and Fun Museum in Lakeland. He was also a member of the Imperial Polk Obedience Club where he and Linda participated in its therapy dog program, Thera Paws. They made over a hundred visits to shut-ins at various facilities in Polk County. In addition to his wife Linda, Bob is survived by his son Robert A. Storts of Spring Hill, Florida, a sister LeeAnn Rader(Fred) of Waco, Texas; a grandson, Alan Storts and a great granddaughter, Abigail Storts, of Apex, North Carolina. He is also survived by two much loved nieces, Felicia Reimer and Celeste Rader Philips. The family wishes to express thanks to the wonderful and caring staffs at Arbor Oaks Assisted Living Facility and Good Shepherd Hospice. They made Bob’s last days as comfortable and peaceful as possible. A memorial service will be held on Saturday, April 17, 2021 at 11:00am at the Christ Lutheran Church. Masks and social distancing are required. In Lieu of flowers donations may be made to Christ Lutheran Church, 2715 Lakeland Hill’s Blvd, Lakeland, FL 33805

The family of Robert B Storts created this Life Tributes page to make it easy to share your memories.

Send flowers to the Storts family.