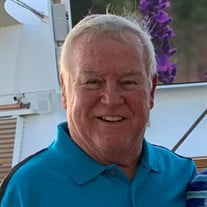 Robert Glenn Seslar was lifted to Heaven by God’s angels in Lakeland Florida on April 1, 2022. Bob (as he was known by family and friends) was born on April 7, 1945, in the small town of Jeannette PA, to his parents Frank and Louise Seslar. He had four sisters and one brother. Bob was an avid golfer. He began his lifelong love of the game when he joined his high school team in 1963. He worked as a caddy at the golf course throughout high school. Bob left PA as a young man to begin his career in the steel industry of Cleveland Ohio. He worked at Republic Steel for 17 years. Bob found his true love in 1969, when he married Sandi, and began a family that would include two sons and a daughter and later an especially loved "Critter" dog. Bob would tell you Ohio winters were tougher than work in the steel mills. In 1985, he fulfilled his dream of moving his family to the warm climate of Florida. He was overjoyed with knowing he’d never shovel snow again in his lifetime. In Homestead Florida, Bob worked his second career for more than 15 years with Miami Dade County Water and Sewer, retiring in 2008. Bob was elated to relocate to Cypress Lakes golf community in Lakeland and spend his days improving his golf game. Bob was a family man. He dedicated his life in support of his family. He spent many years involved in coaching and cheering for his son’s baseball. He was an active church going Christian and was a neighbor committed to helping the people in his community. When Bob wasn’t golfing, he was watching golf or football, or talking scores and strategy with his friends. Some of his happiest memories were playing the game he loved with his wife and son. Bob was also a great cook. Sundays were a time for church in the morning and family and friends gathering for food and cheering on the Pittsburgh Steelers in the afternoons. He was known for his talent on the grill and his homemade chili. Together, Bob and Sandi enjoyed traveling the world. Bob enjoyed sightseeing across the USA and especially loved many cruises to the Caribbean. Mostly, he loved being with Sandi, as she was his sunshine. Bob is survived by his wife of 52 years, Sandi, his son David Seslar in the Philippines, daughter Dawn Paris and husband Harold, and his son Dennis Seslar and wife Katie, along with 7 grandchildren and his sister Norma Kennedy. A memorial service and reception will be held on Sunday, April 10, 2022, at the Cypress Lakes Community Club House from 5-8pm. Friends and family are invited to enjoy food and beverages along with a lively exchange of memories about Bob. In lieu of flowers, please consider donating to Gold Coast Down Syndrome Group at https://goldcoastdownsyndrome.org

Robert Glenn Seslar was lifted to Heaven by God&#8217;s angels in Lakeland Florida on April 1, 2022. Bob (as he was known by family and friends) was born on April 7, 1945, in the small town of Jeannette PA, to his parents Frank and Louise Seslar.... View Obituary & Service Information

The family of Mr. Robert Glenn Seslar created this Life Tributes page to make it easy to share your memories.

Robert Glenn Seslar was lifted to Heaven by God’s angels in Lakeland...

Send flowers to the Seslar family.