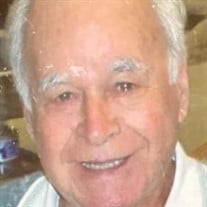 On January 22, 2022, at the amazing age of 102, Robert L. Lewis of Lakeland FL, passed due to complications of the coronavirus. Robert (known to many as Pete) was born in Rockland, MA to Leslie R. Lewis and Anna (Gallagher). He was the brother to the late Geraldine, Pauline, Louise, Joe, Pres, Will, Jack and Edward. He is survived by his sister Sally Brunke and son Richard P. Lewis (Maureen) of Rockland. He was pre-deceased by his son Robert L. Lewis Jr (Rosalie). Robert was married to Lydia (Spaziani) with whom he had his two sons. He was also married to the late Evelyn (Kilroy) and shared a home in Abington for many years. Later on, Pete became a long-time companion to the late Betty McNamara. He is survived by his two wonderful daughters-in-law Maureen and Rosalie Lewis who cared for him in so many ways over the years and was a father to them. He leaves behind his granddaughters Robin, Regina, Mia, Renae and Nadine. He was pre-deceased by his beloved grandson Joey. Known as Grampa Pete, he leaves behind his great grandchildren (Ryan, Kevin, Hailey, Justin, Brooke and Olivia), along with many nieces and nephews. He was pre-deceased by his great-grandson Jared Quirk. He leaves behind his very special Florida neighbors who became his surrogate family over the years and Michael McNamara. An entrepreneur at heart, Bob had many careers spanning his lifetime. He founded multiple businesses including Robert Lewis Construction and the Rockland Garden Center, which is still thriving today. He was a friend and mentor to countless people along the way and his work ethic was unparalleled. He was an adventurous soul who loved anything that he could drive or fly. He raced cars at Daytona Beach, had his pilot’s license, raised and rode his horses and did long haul trucking across North America. An accomplished golfer, Pete had the distinction of “shooting his age” (an 80 at 80!) He was most proud of his 15,000-mile road trip from MA to Alaska and back, hitting just about every corner of the country. Pete was always in for a Disney trip, taking dozens of them with his family throughout the years. Pete loved a good party and created a back yard oasis at his home in Abington. He taught many a swimming, golfing, horseshoe and bocci lesson all while saving time to host his legendary cookouts. An avid gardener he grew every vegetable imaginable and shared them with all of his neighbors and community. He tended his garden well into his 90’s and said “it was what kept me going” weeding on his hands and knees. He was a man with only an 8th grade formal education but no one can argue he had a “doctorate” in life! Services will be held at a later date.

On January 22, 2022, at the amazing age of 102, Robert L. Lewis of Lakeland FL, passed due to complications of the coronavirus. Robert (known to many as Pete) was born in Rockland, MA to Leslie R. Lewis and Anna (Gallagher). He was the brother... View Obituary & Service Information

The family of Robert L Lewis created this Life Tributes page to make it easy to share your memories.

Send flowers to the Lewis family.