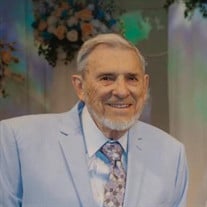 Richard Allen Borde Richard Allen Borde, of Lakeland, Florida, went to be with his Heavenly Father, on November 23, 2020 at the age of 88. After several months of declining health, he passed away peacefully at home. He was a great husband, father, grandfather, great-grandfather, and most importantly to him, a child of God. Richard “Dick” Borde was born on April 5, 1932 to George Henry Borde, Jr. and Ernesta “B” Allen Borde in Winter Haven, FL. His family moved to Tampa, FL where he graduated from Plant High School in January 1949. In February 1951, during the Korean conflict, he enlisted in the US Coast Guard and was stationed in New Orleans, LA until he was honorably discharged in February 1954. During his military service, he married his high-school sweetheart, Gloria Anne Arrington, on January 26, 1952. They were married almost 40 years when she was diagnosed with a rare and terminal kidney disease and preceded him in death on November 21, 1991. Richard attended both Yale University and the University of Florida. He graduated from the University of Florida in 1957 with a Bachelor of Science in Business Administration. Following college, Richard began his life long career as a CPA. He worked in both Baton Rouge, LA and in Lakeland and Winter Haven, FL. His employment included, A. Edgar Thomas, CPA; Stupp Corporation; Borde & Morton, CPAs; Carter, Belcourt and Atkinson; and Adamson and Co., P.A. Richard loved his career and actively practiced until he retired in 2015 at the age of 83. Richard avidly loved sailing. He competed in many sailing regattas on his boat, Freedom Flyer; and enjoyed, traveling, reading, and was a huge fan of the Florida Gators. He was a member of the Apollo Beach Yacht Club; the Tampa Sailing Squadron; treasurer of TSS Youth Sailing Squadron; an active member of the Kiwanis Club; on the Board of Directors for the Citrus Chapter of the National Kidney Foundation; and was an active member of The Great Commission Worship Center. September 5, 1992 Richard married Loretta Bumgarner. During 28-years of marriage, they enjoyed spending time with their children, grandchildren; and extended family. They shared a special gift of recognizing those in need of assistance, and were willing to share their time and resources for help and hope. Richard was survived by his wife Loretta; children, Susan Allen; Barbara (Richard) Tulley; Richard “Rick” Borde; Becky (Warner) Mitchell; and Gina (Preston) Zwanzig. He was also survived by his grandchildren; John Tulley; Beth Tulley; Shelly (Jad) Denmark; Brooke (Austin) Albury; Lauren (Joseph) Wilder; Jesse Allen; Gordon Allen; and Sabrina Allen. His great grandchildren are Lleyton Denmark; Hayden Denmark; Lilly Denmark; Denver Albury; and Madeleine Allen. He was also survived by numerous nieces and nephews. Richard was preceded in death by his parents; wife Gloria; older sister Becky Bourg and brother-in-law, Jimmy Bourg. A special thank you to VITAS hospice, especially team 234, for their loving care and support over the last six months and particularly during his final days. Richard often referred to his VITAS team as guardian angels that that took extremely good care of not just him, but of his family also. Visitation will be at Gentry Morrison South, 1727 Bartow Road, Lakeland, FL 33801 on Monday, November 30, 2020 from 6–8 pm and funeral services are on Tuesday, December 1, 2020 at 10 am. Burial will follow at Oak Hill Cemetery. In lieu of flowers, memorials may be made to VITAS Healthcare Hospice, 6850 New Tampa Hwy Ste 600, Lakeland, FL 33815.

Richard Allen Borde Richard Allen Borde, of Lakeland, Florida, went to be with his Heavenly Father, on November 23, 2020 at the age of 88. After several months of declining health, he passed away peacefully at home. He was a great husband,... View Obituary & Service Information

The family of Richard Allen Borde created this Life Tributes page to make it easy to share your memories.

Send flowers to the Borde family.