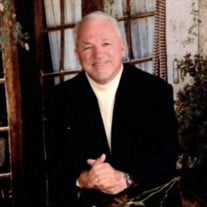 Randall Jefferson Gambill was born in 1948 to Samuel and Dorothy (Burcham) Gambill in Elkin, North Carolina. Randy and his brother Michael spent most of their childhood surrounded by a loving family of Aunts, Uncles, and cousins. As a young man, the family relocated to Florida where he attended Evans High school in Orlando and graduated in 1967. During his time at Evans he was involved in baseball, football, and band and after school could often be found at his father’s garage where his love of automobiles was born . After high school he married his first wife Marjorie Boals and began his career in law enforcement working first as an undercover officer for the Orange County Sherriff's Office. During that assignment, his first and only son, Kevin Heath Gambill, was born in 1972. Shortly after that, Randy took on the new challenge of working for the Maitland Police Department as a detective. It was during that time that his first daughter, Carean Leslie (Gambill) Johnston, was born, and the family made their way back to Elkin, North Carolina where in 1978, their second daughter Amanda Jill (Gambill) Wolfe was born. In 1980, a unique opportunity presented itself in the form of managing a standard-bred horse farm in Ohio with family friend, Hilda Heydt. While in Ohio, Randy began his career in the welding/robotics industry with the company Unibraze. He excelled at sales and was quickly promoted to International Sales Manager and traveled the world visiting places such as Egypt, Venezuela, Puerto Rico, and Columbia. Later on, Randy married his second wife Linda (Robbins) Gambill and together, with their daughter Jennafer Ashley Belabin, they moved to Lakeland, Florida in 1990. They attended Victory Assembly of God where he enjoyed singing in the choir. Linda and Randy traveled around for their careers including time in both Georgia and Pennsylvania, eventually landing back in Lakeland where Randy retired and enjoyed several years at Cypress Lakes surrounded by great friends and had many wonderful experiences. Ready for their next adventure, Randy and Linda had recently acquired a new camper and looked forward to exploring the wonders of the nation together. Randy enjoyed golfing, shooting guns, politics, cooking and grilling, whittling, boating, snow skiing, water sports, scuba diving, and of course, Alabama football. His passion for working on cars and machines never wavered. Always a mentor for his family and community, Randy coached t-ball, baseball, and soccer and was a Boy Scout leader for several years. As a true nature lover, he relished in fishing, hunting, hiking and camping. Randy was full of corny jokes and entertaining stories. He had an infectious, unforgettable laugh. Randy was blessed with five grandchildren, Rylee and Ainsley Gambill, Kamden, Kohen, and Amelia Wolfe. He was very proud of his children and grandchildren and spoke of them often. He was a devoted and loving soulmate to Linda and will be missed dearly. His family can rest knowing his firm beliefs in the Lord and heaven, knowing they will one day meet again.

Randall Jefferson Gambill was born in 1948 to Samuel and Dorothy (Burcham) Gambill in Elkin, North Carolina. Randy and his brother Michael spent most of their childhood surrounded by a loving family of Aunts, Uncles, and cousins. As a young... View Obituary & Service Information

The family of Randall J. Gambill created this Life Tributes page to make it easy to share your memories.

Randall Jefferson Gambill was born in 1948 to Samuel and Dorothy...

Send flowers to the Gambill family.