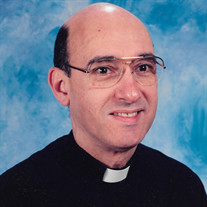 On Thursday, June 10, 2021, Father Peter Anthony Ferguson, beloved son, brother, uncle, friend and retired priest, passed away at the age of 84 years after a long struggle with Parkinson’s Disease. He was born December 22, 1936 in St. Lucia, West Indies, with his adolescent years spent in Belize and Trinidad. His formative years in elementary and secondary school at Mount St. Benedict Abbey in Trinidad were a huge influence on his life in the Catholic Church and helped form his lifelong relationship with God. Peter, along with his extended family, moved to Lakeland, Florida in 1973. Peter was a true “Renaissance man”, pursuing many of his life’s interests with great passion, versatility, curiosity and skill. A multi-sport athlete in high school, Peter was also a dedicated scholar of philosophy and theology, graduating with honors from Polk County Community College in 1980, and receiving a Bachelor of Arts degree from Don Bosco College of New Jersey in June 1985. He loved to explore the world and visited five continents and dozens of countries in his travels, and his love of flying led him to become licensed as a private pilot. Prior to his priestly duties, his multi-faceted talents were put to use in various occupations such as banking, accounting, sales, and office management. With incredible recall and detail, he often documented and told stories of his travels and life events, which will fondly live on in the memories of his family. After completing his pre-seminary studies at Mater Dei, his seminarian studies culminated with a Master of Divinity degree from Gonzaga University awarded on May 12, 1990 in Spokane, Washington. Father Ferguson was ordained for the Archdiocese of Galveston-Houston on May 19, 1990. He proudly officiated his first Mass at St. Anthony Catholic Church in Lakeland, Florida, as the first priest ordained from St. Anthony parish. He then served as parochial vicar at the parishes of St. John Vianney in Houston, St. Edward in Spring, St. Michael the Archangel in Houston and Sts Simon and Jude in The Woodlands, Texas. He was appointed Pastor of Our Lady of Lourdes in Hitchcock, Texas from 1997 - 2003 before retiring and moving back to Florida for health reasons. He continued to serve the church at the Diocese of Venice in Florida until he was no longer able. Peter is survived by his loving brother, Stanley Ferguson of Lakeland, and recently preceded in his death by his other brother, Duncan Ferguson of Lakeland. He is also remembered and loved by his four nieces, Charline Runfeldt, Roseanna Partridge, Lizette Batterton and Francine Ferguson, and his nephew, Nicholas Ferguson, of Lakeland, and their extended families. His positive, gentle and lasting impact on his many friends, family, parishioners, fellow priests, and community is immeasurable and will be remembered long after his passing, with even an avenue named in his honor in his former parish in Hitchcock, Texas. A Wake will be from 10 - 10:30am and Mass of Christian Burial will be celebrated at 10:30am in memory of Peter on Friday June 18, 2021, at St. Anthony Catholic Church in Lakeland, Florida. The Very Reverend Timothy LaBo, Dean/Vicar Forane of the Western Deanery of the Diocese of Orlando, will be presiding. If you would like to make a donation in Peter’s memory in lieu of flowers, please consider St. Anthony’s Catholic Church in Lakeland, the Archdiocese of Galveston-Houston, and/or the National Parkinson’s Foundation.

On Thursday, June 10, 2021, Father Peter Anthony Ferguson, beloved son, brother, uncle, friend and retired priest, passed away at the age of 84 years after a long struggle with Parkinson&#8217;s Disease. He was born December 22, 1936 in St.... View Obituary & Service Information

The family of Fr. Peter Anthony Thomas Ferguson created this Life Tributes page to make it easy to share your memories.

Send flowers to the Ferguson family.