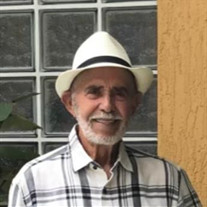 Orlando Peña Lago 12/27/1935-9/22/2021 Lakeland- Orlando Peña Lago Co was born in Cumanayagua, Cuba in 1935. He attended University in Cienfuegos, Cuba. He moved to Santa Clara, Las Villas, Cuba in 1957 where he met his loving wife, Lidia Esther Rodriquez Sarduy. Together with their young daughter, Dámaris, they immigrated to the United States in 1966. They settled in North Bergen, New Jersey where his youngest daughter, Odalis, was born. In 1973, he sold his business, La Cubana, and relocated his family to Tampa, Florida where he remained until moving to Lakeland in 2018. Orlando was always very active in his church and with his church family, where he served as a deacon, teacher, and lay preacher. Always joyful to share his faith, a meal and even his home. Orlando was preceded in death by his parents Samuel Peña Co and Isabel Lago Valladares. He is survived by his wife of 60 years, Lidia; his daughters, Dámaris (Daniel) Medina and Odalis Peña; and his grandchildren, Karis (Samuel McCune) Medina, Zachary (Gina) Peña, Noah (Victoria Boucher) Peña, and Hannah Peña; great granddaughter, Eva Amaia Medina-McCune. He is also survived by his sisters, Oralia and Clara Peña and his nieces and nephews, Ismaris, Carlos, Frank Abel, Leonardo, and Ana Flavia. Visitation will be Monday September 27th from 6-8 pm at Gentry Morrison Southside Chapel. Masks are required to attend.

The family of Orlando Peña Lago created this Life Tributes page to make it easy to share your memories.

Send flowers to the Lago family.