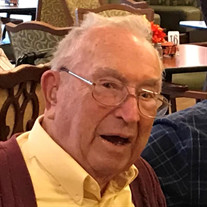 Omar (Bud) Garman Witmer, Jr, 94, of Lakeland, FL passed away peacefully in his sleep on December 13, 2021, ready and eager to meet his Lord in the Promised Land. Born August 25, 1927, Bud was the fifth child of Omar and Anna Witmer, and grew up in Lancaster, PA. He graduated from Brooklyn Poly Tech High School in 1945 after his family moved to New York City. He met Grace Cross, who would become his wife and life partner, at Richmond Hill Baptist Church in Queens, and served in the United States Navy from 1945-1946. Bud and Grace were married in 1951 and bought their first home in Lynbrook, Long Island, where they raised their four sons. Bud earned a BS degree in mechanical engineering from Hofstra University in 1963 after attending night school for many years. He worked for the Bulova Watch Company for 44 years until his retirement in 1990, and he and Grace moved Upstate to Cazenovia, NY where they lived until 2006. They relocated to the Florida Presbyterian Homes in Lakeland, FL in 2011. Bud loved time spent outdoors, whether it was gardening, traveling, or camping; Fish Creek State Campground was his favorite, as he could sail, canoe, swim, water-ski, hike, and ride the tandem bicycle with Grace to his heart’s delight. They loved camping and were members of several camping clubs and square-dancing groups, and they enjoyed many years of healthy retirement together, traveling up and down the East Coast and going on cruises ranging from the Panama Canal to the Caribbean to Alaska. Serving his community, Bud was active as a 4-H group leader and sang in both church and local choirs, including some variety shows and barbershop quartets. He was elected and re-elected to several terms on Lynbrook’s Board of Education, serving as President for many years – long enough to hand each of his sons their high school diplomas at graduation. Bud and Grace were active members of the BYKOTA class at the First United Methodist Church in Lakeland. Predeceased by three sisters – Miriam Young, Ruth Thomas, and Helen Ott – Bud is survived by his sister Esther Fickes, brothers Larry and Ken, and wife, Grace, as well as four sons – James (Carol) Witmer, of Orlando, FL; David (Deborah) Witmer, of Liverpool, NY; Daniel (Sue) Witmer, of Oswego, NY; and John Witmer, of Williston, VT – and six grandchildren – Anna, Thomas, Patrick, Kevin, Brian, and Eric – and four great-grandchildren – Amelia, Connor, Emerson, and Olivia – and many, many nieces and nephews who loved their Uncle Bud. Condolences can be left on-line at www.gentry-morrison.com.

Omar (Bud) Garman Witmer, Jr, 94, of Lakeland, FL passed away peacefully in his sleep on December 13, 2021, ready and eager to meet his Lord in the Promised Land. Born August 25, 1927, Bud was the fifth child of Omar and Anna Witmer, and grew... View Obituary & Service Information

The family of Omar G. Witmer created this Life Tributes page to make it easy to share your memories.

Send flowers to the Witmer family.