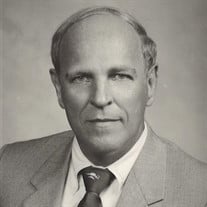 Oliver Nelson DeCamp Jr. born on January 25,1938 in Dobbs Ferry, New York the oldest son of Dr. Oliver Nelson DeCamp Sr. and Catherine Cameron DeCamp passed away on May 02,2021. He was preceded in death by his parents and younger brother Cameron DeCamp. He is survived by his wife and life companion, Dena Stebbins DeCamp of Lakeland, many cousins and Goddaughter Jennifer Grinnell her husband Peyton Grinnell and her children Lauren Chavous and Blake Grinnell. Dr. DeCamp has been a resident of Lakeland since 1948 and graduated from Lakeland High School in 1956. He then graduated from the University of Florida, in 1961 with a B.S. in Agricultural Engineering. During his time at UF, he was Vice President of the Pi Kappa Alpha Fraternity and President of the UF Student Union, in charge of campus student organizations. He spent the next two years in Chiropractic College in Los Angeles and then transferred to Indiana and graduated from Lincoln Chiropractic College in 1965 and returned to practice in Lakeland, FL with his father. Dr. DeCamp spent 56 years in practice in Lakeland. In the early 1970’s, Dr. DeCamp, was in charge of a small group that established the Sacro Occipital Research Society International. Certifications in Advanced Sacro Occipital Technique and Craniopathy was attainted early and as a Certified Instructor he was taught seminars throughout the U.S. extensively for over forty years as well as multiple series of seminars in England and France and numerous other seminars in Japan, Australia, and Hong Kong. In addition, he taught a series of seminars for 4 years at two Universities in Brazil. As a Certified College Instructor, he has taught Post Graduate seminars for 4 Chiropractic Colleges in U.S., one of 20 years, all this while keeping his full- time practice active. In 1990, Dr. DeCamp, began a two year Post Graduate program in Neurology, received his Diplomate status and two years later retook the entire course as a refresher to begin including it into his teaching curriculum and research papers. Certification has also been attained in Acupuncture, Rehabilitation, and Proprietary drugs and he had studied and applied Nutrition extensively. As a member of S.O.R.S.I, he was on the Board of Directors for 19 years. Nine years were spent as V.P. in charge of Education and Research and in 1994-5 was President. During the past 30 years he had written and presented over 20 research papers, most of which have been published. In 1984 he was voted Chiropractor of the Year, 1998 voted Researcher of the Year, in 2006 the first Lifetime Distinguished Service Award and 2017 SOT international Conference awarded a ‘Lifetime Achievement Award for all his efforts in the advancement of the organization and the chiropractic profession. In addition, he received many awards and commendations from the various countries he taught in. Dr. DeCamp loved to travel and traveled extensively to many countries with his teaching. His weekends were spent sailing Tampa Bay, up and down the coast of Florida and to the Bahamas as well as reading. As many Polk Countians know, Dr. DeCamp was a dedicated doctor that loved his patients, he educated them on Chiropractic, proper nutrition and healthy lifestyle. A gathering will be held Thursday, May 6 at Gentry-Morrison Southside in Lakeland from 4pm- 6pm, with the Memorial service on Friday May 7 at 10am at the funeral home. In lieu of flowers, donations may be made to Sacro Occipital Research Society International: https://SORSI.com/Donate

Oliver Nelson DeCamp Jr. born on January 25,1938 in Dobbs Ferry, New York the oldest son of Dr. Oliver Nelson DeCamp Sr. and Catherine Cameron DeCamp passed away on May 02,2021. He was preceded in death by his parents and younger brother Cameron... View Obituary & Service Information

The family of Dr O. Nelson DeCamp Jr created this Life Tributes page to make it easy to share your memories.

Send flowers to the DeCamp family.