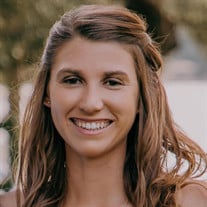 Natalie Miller Brown A beloved mother, wife, daughter, sister, granddaughter, niece, cousin, and friend, Natalie Miller Brown left this world on November 11, 2020. Born Natalie Miller Lang in Lakeland, Florida on June 16, 1987 to Jeff and Darla Lang. Natalie grew up in Lakeland. She excelled in many things throughout high school including academics, soccer, and softball. She attended Florida Southern College earning softball and academic scholarships. During her time at FSC, she earned many awards including Who’s Who among American Colleges and Universities, All-SSC Team 3 times, SSC Commissioner’s Honor Roll 4 times, NFCA Scholar-Athlete Award 4 times, Academic All-Region player and NCAA D-II National Player of the Week in March, 2009. During her junior year Natalie was awarded the Pat McFadden Award. This elite, annual award is presented to the female and male student-athletes with the best combination of athletic and academic success. In 2014 Natalie was awarded a Master’s Degree in Counseling from Nova Southeastern University. In 2009, after graduating summa cum laude from Florida Southern with a degree in Elementary Education, she married the love of her life, Timothy Daniel Brown. Shortly after, Natalie and Tim began their Army adventures. Through two deployments and five moves, including stops in Alabama, Kansas and Colorado, Natalie contributed in multiple volunteer positions. In each one, Natalie not only succeeded but was a ray of sunshine to everyone she encountered at every duty station. In 2017, after eight years of military life, Natalie and Tim returned to live in Lakeland. With the many accomplishments Natalie earned in her life, her greatest was being a mom. From the time she was young, Natalie dreamed of becoming a mother. On March 30, 2011, that dream came true when Logan Daniel Brown was born. Her dream came true again on February 5, 2013 when Kinsley Nicole Brown was born. Whether it was getting her kids to soccer practice, coaching T-ball, managing her fantasy football league or running marathons, Natalie was the perfect mom and her children were her everything. Natalie is preceded in death by her grandfather Jerry Miller and grandparents Bill and Eleanor Lang. Natalie is survived by her husband Tim, children Logan and Kinsley, parents Jeff and Darla Lang, grandmother Mary Miller, brother Brant (Anthony), aunt Cathy (Ted) Williams, uncles Steve (Beth), David (Carry), Matt (Stacy), in-laws David and Barbara Brown, brothers-in-law Tom (Ali) and Jacob (Brianna), many cousins, and many friends who became family. Natalie’s strong faith in God, beautiful smile, caring personality, competitive spirit, and heart of gold impacted everyone she knew. Her presence in our lives will be forever missed. To honor Natalie, a Celebration of Life will be held Thursday, November 19 at 2:00 pm at Grace City Church-Lakeside Campus, 1736 New Jersey Road, Lakeland, FL 33803. Natalie’s love for animals was known to all. In lieu of flowers, we ask donations be made to the Central Florida Chapter of Canine Companions for Independence at www.cci.org/donate/ (in memory of Natalie Brown).

The family of Natalie Miller Brown created this Life Tributes page to make it easy to share your memories.

Send flowers to the Brown family.