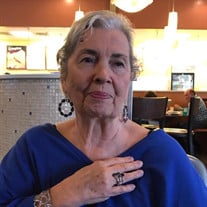 Myra Ruth (Pitts) West 8/11/2020. Myra Ruth of Lakeland, Florida passed away in the loving arms of her youngest son Chris, with Jimmy her second born son at her side on Good Shepard Hospice in Lakeland, Florida, on August 11, 2020. Myra... View Obituary & Service Information

The family of Myra Ruth (Pitts) West created this Life Tributes page to make it easy to share your memories.

Send flowers to the West family.