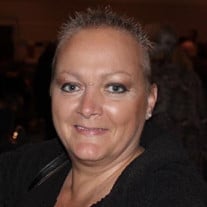 Melissa M Hazlett August 5, 1966 ~ July 24, 2020 Melissa M (Missy) Hazlett (née Klaitz) died peacefully on July 24 at Lakeland Regional Health in Lakeland, FL at the age of 53. Melissa is survived by her loving husband of nearly 22 Years, James, and her two beautiful children, Colton, 19, and Carley, 18. She was preceded in death by her mother, Connie Klaitz and father in law, H. James Hazlett. Melissa was born on August 5, 1966 in Delanco, NJ. She graduated from Riverside HS in Riverside, N.J. in 1984. She continued her education at Rowan College at Burlington County and the University of Phoenix. Melissa married James on Sept. 5, 1998. They welcomed their two beautiful children, Colton in 2001 and Carley in 2002. They moved to Lakeland in December of 2001. Melissa became a PTO volunteer at Highlands Grove Elementary and eventually became an employee of the school as a paraprofessional and then an IT professional, where she worked and excelled till her passing. Melissa had many hobbies and interests, but her favorite hobby was heading to the shore, that’s beach for the Floridians, with her toes in the water and her ass in the sand. She will be sorely missed by those who knew her and loved her. From her daughter Carley: My Mom was the most powerful, strong, caring and passionate Woman I have ever known. She loved her job and everyone she worked with. She loved working with children. She had so much fun networking and she had so many Friends at work. She had so much Love to give, you just had to get past the Jersey Girl bluntness. In lieu of flowers, the family requests donations to the H. Lee Moffitt Cancer Center.

The family of Melissa M. Hazlett created this Life Tributes page to make it easy to share your memories.

Send flowers to the Hazlett family.