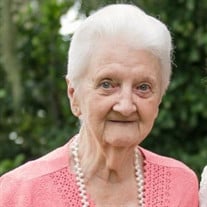 Maureen Ann Wood was called home to the Lord at the age of 89 on April 19, 2022 in her home of Polk City FL surrounded by family. She was a loving, wife, mother, grandmother, great grandmother and friend. Maureen was born at home in Broad Channel New York to Genevieve and James Ferris, She grew up in the Broad Channel/ Rockaway neighborhoods and attended Stella Maris Catholic school. After graduation she worked as a key punch operator and a bookkeeper. After writing as pen pals to a solder stationed in Germany she met Richard Wood for the first time at the New York pier when he was home on leave. They both enjoyed roller skating, dancing and going to the movies. After they were married the army stationed them in Manhattan Kansas and Germany. Maureen use to tell the story of how she was on the same ship as Elvis while sailing to Germany, she was too sea sick to care. Maureen and Richard were blessed with two daughters Jane and Darlene. After leaving the service the family settled in Central Islip New York. Maureen had a passion and artistic talent for sewing, quilting, embroidery, knitting, and crocheting. Her creativity led her to help other with her contribution of time, blankets, quilts, hats, clothing and costumes. She donated many cancer hats, lap quilts and dolls, and clothing to those in forester care. She was active in many organizations throughout her life, a Girl Scout leader for her daughter troop, a member of the National Campers and Hikers Association (Woodpeckers camping group) she enjoyed travailing with friends and family in their camper. Both she and Richard loved to dance and were members of a Square Dance group and for all of her work and years of support to the Dixie Express Cloggers and the Green Swamp Stoppers she was inducted into the Florida Clogging Council Hall of Fame, even though she never clogged. Maureen is survived by her two daughters Jane Tallent, Darlene Melius, son-in-law Mark Melius, Grandchildren Melissa Loerwald, Corrin Conticello, Richard Melius, Heather Arnold, Genevieve Huggins, and Megan Tallent. Great Grandchildren Gavin McKenzie, Michelle Conticello, Alaina Conticello, Alivia Coticello, Logan Loerwald, Liam Loerwald, Aleigha Conticello, Benjamin McBride, Markie Arnold, Bryan Huggins and Byrl Arnold. A memorial mass will be held at St. Anthony's Catholic Church on Thursday, April 28th, at 10AM. Following the memorial mass, the family will receive friends from 11:30-12:30 PM for a visitation at Gentry-Morrison Funeral Home, Serenity Gardens Chapel.

Maureen Ann Wood was called home to the Lord at the age of 89 on April 19, 2022 in her home of Polk City FL surrounded by family. She was a loving, wife, mother, grandmother, great grandmother and friend. Maureen was born at home in Broad Channel... View Obituary & Service Information

The family of Maureen Ann Wood created this Life Tributes page to make it easy to share your memories.

Maureen Ann Wood was called home to the Lord at the age of 89...

Send flowers to the Wood family.