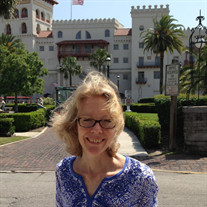 Lynnette Raffio, 66, passed away on Wednesday, April 28, 2021. Lynnette was born in Rochester, New York. She grew up in upstate New York and New Jersey and attended the Katharine Gibbs school after graduating from Montville Township High School. At age 22, she relocated with her family to Lakeland, Florida, where she lived for most of her life. Lynnette built a decades-long career at Pepperidge Farm, Inc., working alongside people she truly loved and respected before retiring and pouring her love and her time into her family and friends. She is preceded in death by her parents, Thomas and Carol Harvell. She is survived by her daughter, Samantha Bamaca, son-in-law, Emerson Bamaca, and granddaughter, Isla Bamaca. She is also survived by her brother, David Harvell (Kim), niece, Jacquelyn Harvell (Tyson & Margo), nephew, Thomas Harvell (Brittany), uncle, Rick Harvell (Patty), and cousins, Mike, Scott (Kristy), Rick Jr. (Robyn), and Dan (Michelle) Harvell. Lynnette was the epitome of selflessness, compassion, care, and support for the people around her. She was a shining light, offering a safe haven to anyone who passed her port. She lived with absolute humility, courage, and grace, introducing a sense of peace that enveloped people when they needed it most. Sustained by her faith in God and her love for people, Lynnette lived out a calling to shine the light of the Lord in every endeavor. She had an uncanny ability to come alongside a person and care for them the way the Lord cares for his flock. This natural gift for imparting unconditional love opened the door for her to share God’s grace with the people around her, which she did freely and often. Not a day will pass that we won’t miss Lynnette greatly. However, her light cannot be extinguished. It lives on in every single person she touched. A viewing will be held on Monday, May 3, at Gentry-Morrison Southside from 5-7pm. This will be followed by a graveside service at Oak Hill on Tuesday, May 4 at 10am. For those who feel moved to give, donations may be made in lieu of flowers to the following organizations close to Lynnette’s heart: The Moody Bible Institute to support Moody Bible Radio Covenant House to support an organization that builds a bridge to hope for young people facing homelessness and survivors of trafficking through unconditional love, absolute respect, and relentless support.

The family of Lynnette Harvell Raffio created this Life Tributes page to make it easy to share your memories.

Send flowers to the Raffio family.