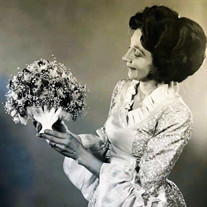 Lucille J. (Szabo) Miller, age 99, a resident of The Florida Presbyterian Homes, died March 9, 2021 of Kidney failure. Born in Detroit, MI on August 30, 1921, she was a 1944 graduate of the University of Michigan School of Nursing. Lucille worked in Ann Arbor, MI with Dr. Jonas Salk when he first isolated and prepared a successful polio vaccine. She served on the staff of South View Hospital in Milwaukee, WI during a devastating epidemic of bulbar polio in 1950. For many years she held leadership and teaching positions in the Boy Scouts and Girl Scouts of America in the Pittsburgh, PA area. She was a trained professional seamstress and milliner, licensed by the State of Pennsylvania. When the Millers moved into a spacious restored colonial home near Pittsburgh (on the National Registry of Historic Places), she established a craft studio and became widely known for restoring and gilding antique picture frames. Examples of her work grace many museums, including the Ringling Museum in Sarasota, FL. She also returned to nursing, specializing in complex private duty care requiring special knowledge and attention. Much of her work was with seniors and she was especially loved by the families of her patients. She was a qualified psychiatric and post-operative nurse and continued to practice these specialties after moving to Florida in 1986. Charles and Lucille Miller became residents of The Florida Presbyterian Homes complex on Lakelands Lake Hunter in 1990. There she busied herself making silk flower bouquets for every resident who was hospitalized and every patient in the Nursing Home. She also organized a Hobby Fair showing off the many talents of the retirees. Lucille meticulously restored a very large fifteenth century antique Italian frame; bronzed and gilded with 23k gold leaf, installed a mirror and donated it to the Homes where it hangs on the wall of the dining room entry for the enjoyment of all. As an elder of the Westminster Presbyterian Church, she contributed much to the life of the church, organizing historical displays and is remembered for her diligent concern for the hearing impaired by managing the hearing-aid program. Her seasonal silk flower arrangements graced the chancel every Sunday morning. Surviving Lucille are her son, Charles T. Miller, three daughters, Kathryn MacLean, Janice Hunt and Leticia Miller, and two granddaughters, Rachel Hunt and Emily Hunt.

Lucille J. (Szabo) Miller, age 99, a resident of The Florida Presbyterian Homes, died March 9, 2021 of Kidney failure. Born in Detroit, MI on August 30, 1921, she was a 1944 graduate of the University of Michigan School of Nursing. Lucille... View Obituary & Service Information

The family of Lucille J. Miller created this Life Tributes page to make it easy to share your memories.

Send flowers to the Miller family.