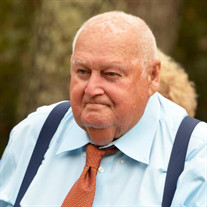 Lucian Combee, a long time resident of Polk City, FL, passed away on August 7, 2021. He departed this heavenly earth in peace. Lucian was born on September 9, 1939 in Polk City, FL. to father Walter Maxwell Combee and mother Hazel Alice Wynn, and son Wynn Combee preceded him in death. He grew up in a large, loving, family of 5 girls and 8 boys. Lucian was an extremely driven man whose work ethic was extraordinary. He started at a young age picking strawberries with his family to retiring from People’s Gas of Lakeland for over 20 years. Lucian also built and ran Combee and Son Meat house. Lucian is survived by his loving wife Susan Combee and his dog Lulu, stepchildren Brett Taylor and Tiffany Taylor Hegler, grandchildren Ashley Combee, Samantha Taylor, and Cooper Taylor. He was one of thirteen brothers and sisters and survived by Merel & Richard Moore, Linda Knowles, Bernice St. Clair, Vincent Combee, and Terry & Lavania Combee. He is preceded in death by his first wife, Annie Ruth Combee; sisters, Enuce Baker, Wanda Cantinna; brothers Wayne Combee, Neil Combee, Glen Combee, Lowell Combee, and Jerry Combee. Due to the surge in positive cases with Covid in this area and the fact this is why we are having a funeral for Lucian the family has decided to have a private service. At a later date and time there will be a celebration of life.

The family of Lucian Wynn Combee created this Life Tributes page to make it easy to share your memories.

Send flowers to the Combee family.