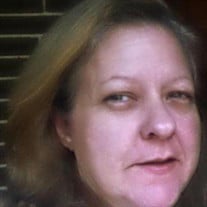 On July 7, 2021 Lisa Beth Clyne Tindall passed away in her home in Lakeland, Florida. Lisa left behind Randy Tindall (her loving husband of nearly 34 years), her step-son Robby Tindall, her son Bobby Tindall, her daughter Casandra Tindall, and her youngest son Matthew Tindall. Lisa was born in Oneida, New York, on September 9th, 1964. Her mother was Rosemarie Blackstone Clyne and her father was Robert F. Clyne Sr. Lisa was the youngest of Robert and Rosemarie’s 10 children: Her siblings are Robert F. Clyne Jr. (Bob), Judi Clyne Waller, Jim Clyne, Jeanne Clyne Craig, Greg Clyne, Jeff Clyne, Francis Clyne, Cindy Clyne Chauncey, and Debbie Clyne Hughes. Lisa was proceeded in death by her mother, father, and elder brothers Robert F. Clyne Jr. (Bob), and Francis Clyne (Frannie). A family memorial is to be held in Lakeland, Florida, at the private residence of Jeff and Marilyn Clyne, on the afternoon of Tuesday July 13, 2021. Lisa was absolutely devoted to her husband and her kids. She loved her animals and had an unbelievable sense of humor. She knew about every word to every song ever. She was fluent in American Sign Language and she and daughter Cassie were able to talk behind your back in front of you (and I’m sure she would find that line funny). Psalm 43:14 For this God is our God forever and ever, he will be our guide even to the end.

The family of Lisa Beth Tindall created this Life Tributes page to make it easy to share your memories.

Send flowers to the Tindall family.