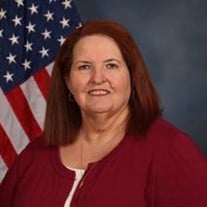 Laura Lee Conrad, age 64, died on March 27, 2022. She was born and raised in Lakeland Florida, and remained a lifelong resident. Since 2015 she served as a records clerk for the Polk County Sheriff's Office. She served as an administrative assistant for risk management for the City of Lakeland, from 1996-2012. From 1984 -1996 she was a commercial loans operation clerk for the Peoples Bank of Lakeland. Early in her career she worked at Paperback Booksmith, known as Dick and Jane Booksellers, and at Montgomery Ward at the Lakeland Mall. Laura was a 1975 graduate of Lakeland High School. She belonged to the Civinettes Club which encourage young people to value and advance good citizenship through service to the community, and was active in the 4-H Club. She earned an Associate degree in Police Science from Polk Community College in 1977, and took additional courses in computer science at Travis Technical Center. She was a member of the SPCA, and loved all animals, especially her special cat, Sam. You could often find her kayaking and fishing, or caring for horses. She was passionate, loved film, live theatre and concerts, and music, especially country music. Laura was a proud member of the Arabian Knight's Fantasy dance troupe and will be deeply missed by her extensive dance family, who have fond memories of her as numerous as the sands on the shores of the Atlantic and the Gulf she loved. A traveler, she could often be found in the company of her many friends who shared her journey. She was born November 8, 1957, the only child of Julia Holmes Conrad and Sidney W. Conrad, who preceded her in death many years ago. She leaves behind her cousins Val Newsome of Jacksonville, Richard and Janis Conrad of Welaka, Debbie Coughlin of Kissimmee, Lisa Gonzales of New Smyrna Beach, and Steve Conrad of DeBary, Victor Ronk of Cape Canaveral; her beloved boyfriend, Gerry Hudson-Martin of Lakeland; and many, many cherished friends, including Colleen Hoffman, and Colleen’s mother Carol, who Laura felt continued to serve as a mom to her after her own mom passed away; Robin and Michael Jenkins, Diana and Brian Dickerson, Mary Jane and Dominic Aguilar, and Sandy and Richard Cochran, all in Polk County. Also David and Julia Winkler in Vermont; Randy Johnson and Mark Buhrke in Atlanta; Julie Stilwell and Michele Christmas in Madeira Beach; Bob and Peggy Crews in North Carolina; Twana Altman Dixon in Tennessee, Linda Sanderson of Michigan; and her many friends and co-workers at the Polk County Sheriff’s Office. A memorial celebration of life will be held on Saturday May14th, at 9:00 AM at the 1961 restaurant’s Havana Room. The entrance says Banquet 1961 at 105 Kentucky Avenue, around the corner from the entrance to the restaurant on 215 East Main Street in Lakeland, across from Munn Park. Please note: the Lakeland downtown farmer's market will be underway from 8:00-2:00PM on Saturday on Kentucky Ave, so there will be very limited on street parking. The entrance to the free public parking lot is on Main Street, only a half a block away. There is also a market parking lot always available 4 blocks north at the corner of Kentucky and Peachtree. You can drop off passengers with limited mobility at the corner of Main and Kentucky, a few yards from the entrance.

Laura Lee Conrad, age 64, died on March 27, 2022. She was born and raised in Lakeland Florida, and remained a lifelong resident. Since 2015 she served as a records clerk for the Polk County Sheriff's Office. She served as an administrative... View Obituary & Service Information

The family of Laura Lee Conrad created this Life Tributes page to make it easy to share your memories.

Send flowers to the Conrad family.