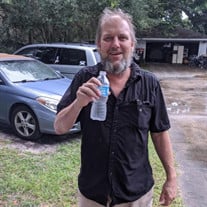 Lance Allen Leeman, 59, passed away at home in Lakeland, Florida on Thursday, March 3, 2022. He was born in Danville, Indiana to parents Allen Le Roy and SueAnn (DeFord) Leeman. He grew up in Plainfield, Indiana, graduating from Plainfield High School in 1981. Lance served in the United States Navy for many years, retiring after 22 years of service. The roles he served throughout his military career are very extensive and showed him all over the world, from Alaska, Japan, and Florida to Washington, Virginia, Hawaii, and Louisiana. Lance served an Aviation Apprenticeship at USS Enterprise (CVN-65) from 1984 to 1985 and graduated from both the Naval Air Technical Training Command and Naval Aircrew Candidate School (NACCS) in 1985, where he studied aviation warfare and exercise, respectively. From 1986 to 1990, Lance served as an acoustic sensor operator at Patrol Squadron Seventeen. During the 90s, he held many duties, ranging from an acoustic analyst at Naval Air Station Norfolk and ASW Operations Center Equipment Operator at Dam Neck Fleet Training Center in Virginia, to undersea warfare module specialist at USS Nimitz in Bremerton, Washington. Lance was a proud Master at Arms First Class at MWR Mayport from 2002-2005, Pacific Missile Range Facility Barking Stands from 2005-2007, and Naval Support Activity New Orleans from 2007-2008. Lance was rightfully proud of his many accomplishments in the Navy and a true Patriot. He was so proud to serve his country and will always be remembered as an honorable and respected veteran. Lance and his family moved to Lakeland from Bremerton, Washington in 1997. In addition to his love for serving our country, he also was an avid historian. He enjoyed studying family history and genealogy, he was very active with his family and always willing to volunteer for the community. Lance leaves behind his wife of 37 years, Janet Dodson Leeman, son Logan (Stephanie) Leeman, and daughter Rachel (Travis) Leeman. He is also survived by both parents, Le Roy (Judie) Leeman and SueAnn Leeman(Shipp & Arthur lineage); brother Anthony Leeman; two grandchildren, Cypress and Jasper; 4 cats and 6 beloved dogs Chumley, Tucker, Critter, Banjo, Larry, and Indy. A visitation will be held on Thursday, March 10th from 10AM – 12 PM at Gentry-Morrison Funeral Home, Serenity Gardens Chapel, 3350 Mall Hill Rd. Lakeland, FL 33810. A committal service with military honors will take place at Florida National Cemetery in Bushnell promptly at 1:30PM. By family request, casual and/or patriotic attire is encouraged, as Lance would have wanted everyone to be comfortable and themselves. Please wear what you feel comfortable in. Clothing with patriotic colors, stars or stripes is a plus!

Lance Allen Leeman, 59, passed away at home in Lakeland, Florida on Thursday, March 3, 2022. He was born in Danville, Indiana to parents Allen Le Roy and SueAnn (DeFord) Leeman. He grew up in Plainfield, Indiana, graduating from Plainfield High... View Obituary & Service Information

The family of Lance Allen Leeman created this Life Tributes page to make it easy to share your memories.

Lance Allen Leeman, 59, passed away at home in Lakeland, Florida...

Send flowers to the Leeman family.