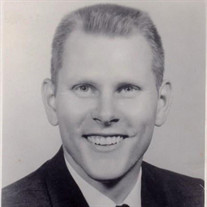 Reverend Kent Herbert Ragsdale Missionary to Haiti 1934-2021 Kent passed peacefully into glory at home on Thursday, July 8, 2021, with his daughter and granddaughter (Kathy and Nicole) holding his hands and singing some of his favorite hymns. Born in Chicago, Illinois on February 27, 1934, to Lt. Col. Robert G. Ragsdale, Sr. and Edith K. (Lindstrom) Ragsdale, Kent grew up as the youngest of three “Army Brats,” with two older brothers: Robert II (Bobby) and James (Jimmy). The family lived in several different places where his father was assigned, but Kent most often spoke of childhood memories in Chicago and at Fort Sill in Lawton, Oklahoma. Preceded in death by his parents, two brothers, and his beloved wife of 61 years, Linda Lou (Davenport) Ragsdale, Kent is survived by his two sons, Karl and Kris Ragsdale, two daughters, Kathy DePue (Jon) and Karen Stanaland (Jay), six grandchildren: Jonathan DePue, Nicole DePue, Connie Diminico, Samuel Ragsdale, Sarah Stanaland and Jennifer Stanaland, as well as four great-grandchildren and one great-great-granddaughter. Kent accepted Christ as his Lord and Savior at a young age and knew early on that he wanted to spend his life in service to God. After high school he attended Moody Bible Institute in Chicago, where he studied to be a licensed radio broadcast engineer. He met his beautiful wife, Linda, during his second year at Moody. They were married July 21, 1956, and determined to serve in ministry together, spending 47 years on the mission field in Haiti in service to our Lord and the Haitian people. As a young couple, with one small son, Kent and Linda moved to Haiti in 1959, where they served as missionaries on the OMS compound near Cap Haitien. Kent worked as a radio engineer and Linda as a secretary for Radio 4VEH, helping to spread the gospel around the world. Kent also helped teach and mentor several young Haitian men on the skills of radio broadcasting and engineering. Kent and Linda eventually moved with the family (now four young children) to Port-au-Prince, where they began working for CEEH (Le Concile des Églises Évangéliques d'Haiti). Kent traveled around Haiti holding crusades and/or providing sound equipment wherever he was invited and no matter what church denomination asked him. He was known to make good use of his 4-wheel drive pickup truck to climb mountains and forge rivers; at times he even went deep inland where there were no roads and his equipment was carried in on the back of donkeys. When home, Kent was always available to help other missionaries. He often fixed broken refrigerators, air-conditioners, etc.; and even fixed other radio stations' transmitters. Together, Kent and Linda spent many years serving other missionary organizations with their correspondence back home as they helped Missionary Flights International with delivering mail to and from Haiti. The “mail depot” was at their home in Port-au-Prince. Missionaries from all over Haiti came and went daily to pick up and leave their mail. As Wardens of the US Embassy, Kent and Linda also represented several American citizens in Haiti for many years. Their responsibilities included communicating any security warnings that came from the Embassy, and helping communicate in urgent times and needs such as a death back home, or an American citizen in Haiti in need of blood. As a licensed HAM radio operator, Kent was often asked to relay messages to Americans in areas where there were no telephones. Music played a big part in Kent’s life. He often played the saxophone, clarinet, and harmonica (a Haitian favorite) at church – mostly harmonizing by ear – and frequently sang as Linda accompanied on the piano, organ, or accordion. Sometimes Kent even played a Haitian bamboo flute. Kent and Linda also sang in the International Community Choir for many years. Even after retiring from the field in Haiti, Kent continued his pastoral ministry by sharing the Gospel and the love of God with anyone who was within hearing range. He always wanted to be sure that the people around him knew the saving grace of Jesus as the only way, truth, and life. From Allan Chabot-Stahls – Missionary friend in Haiti: “The Ragsdales were amongst our closest friends while here in Haiti and loved the Haitian people with all their heart. Linda had a ministry of prayer as very few others I have ever known. Both of them also stood with us from the beginning in the International Community Chorus of Haiti when we presented Handel's Messiah each year. Earth's loss is Heaven's gain.” In lieu of flowers, donations may be made in honor of Kent to any of these organizations that were important to him: • Bible Broadcasting Network – https://bbn1.bbnradio.org/english/ • Foundation for Retired Missionaries – https://ffrm.org/ • Missionary Flights International – https://www.missionaryflights.org/ • Moody Bible Institute – https://www.moody.edu/ • Moody Radio – https://www.moodyradio.org/ • New Life Advance International – https://nlai.org/ • One Mission Society – https://onemissionsociety.org/ • Radio 4VEH - https://www.4veh.org/en/ A Celebration of Life memorial service will be held on Saturday, July 31 at 11:00 AM at Scott Lake Baptist Church, 5811 Scott Lake Rd, Lakeland, FL 33813.The service will also be live streamed at scottlake.org.

Reverend Kent Herbert Ragsdale Missionary to Haiti 1934-2021 Kent passed peacefully into glory at home on Thursday, July 8, 2021, with his daughter and granddaughter (Kathy and Nicole) holding his hands and singing some of his favorite hymns. Born... View Obituary & Service Information

Send flowers to the Ragsdale family.