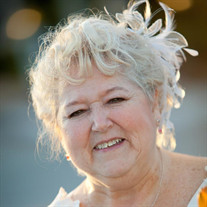 Kathryn Suzanne Campbell Jarrett, 71 LAKELAND – Kathryn S. Campbell Jarrett (aka KC Jarrett), 71, passed away at LRH on June 16, 2020. Kathryn was born Kathryn Suzanne (Suzie) Orren in Erwin, Tennessee on June 24, 1948 to parents Vernon and Ernestine (Clouse) Orren. Her family moved to Lakeland, FL when she was six and she attended Southwest elementary and junior high schools. Graduated from Lakeland Senior High School in class of 1966. She first attended college at University of South Florida and wanting to spread her wings transferring to known territory near Erwin at East Tennessee State University where she graduated. She returned to Lakeland and worked at numerous jobs at Watson Clinic including secretary to several physicians, administrator for Heartbeat International under Dr. McIntire before finishing as a medical transcription auditor. A prolific writer and poet she wrote articles for a now passe Lakeland magazine and was a charter member of Poets on the Park. The article she was most proud of was about the first female EMT to join Lakeland Fire Rescue and her “trials by fire” to be accepted. She retired from Watson Clinic in 2012 to enjoy life at a new house on Lagoon Rd. Her “Nest” was an office/bedroom with a view of the lagoon where she relished watching nature from the baby alligators growing up and swimming off to Summerset Lake to the egrets, ibises, and otters who played and fished in relative peace and isolation. It was her sanctuary from the hectic day to day chores of living. Kathryn is preceded in death by both parents and brother, Edward “Edge” Orren. She is survived by her husband, Paul DeWinter; cousins Harriet and Bryant Helton in Kingsport, TN, Fabien and Lynda Roubotaille in Bradenton, FL nephews, Michael Hall in Ormand Beach, FL; and step sons Michael DeWinter in Fallon, NV and Sean DeWinter, with step-grandchildren Colin & Liam DeWinter in Berlangenbach, Germany, and numerous nieces and nephews to whom she was affectionately known as “Auntie KC” on the Stevens side of the DeWinter family in both Lakeland and Delaware. A funeral procession open to whomever knew KC will begin at 8:30AM on Tuesday 6/23 at Gentry-Morrison Funeral Home, Southside Chapel 1727 Bartow Road, to Oak Hill Burial Park for a graveside service to begin at 9AM. By family request, please bring a favorite photo of KC or you and KC to be posted graveside and as a gift to the family. Due to the COVID-19 pandemic, a Celebration of Life will be held at a later date. Arrangements by Gentry-Morrison Funeral Home, Southside Chapel.

The family of "KC Jarrett" Kathryn S. Campbell Jarrett created this Life Tributes page to make it easy to share your memories.