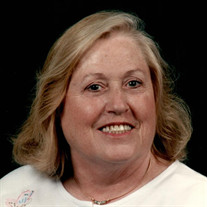 Bartow- Karen Johnson Hurban, of Bartow, Florida, died on May 21, 2021, at Good Shepherd Hospice, Auburndale, Florida, succumbing to multiple co-morbidities related to a prolonged battle against Alzheimer’s disease. She was born Karen Suzanne Johnson on December 27, 1938, in Cleveland, Ohio. Predeceasing were her parents, Clarence M. Johnson, father; Florence M. Johnson, mother; and Robert A. Johnson, brother. She is survived by her husband of 48 years, Joseph M. Hurban Jr. of Bartow, Florida, and her three sons: Paul R. (Karen) Hurban of Winter Haven, Florida; David A. (Teri) Hurban of Pataskala, Ohio; and Christopher M. (Christine) Hurban of Lakeland, Florida. She also has a total of 4 loving grandchildren: Michael (Erin) Hurban of Bloomington, Indiana; Richard (Ricky) Hurban of Pataskala, Ohio; David Hurban Jr. of Pataskala, Ohio; and Abigail (Abbey) Hurban of Milford Center, Ohio. Additionally, she has a total of six fantastic great-grandchildren. After living in Cleveland, Ohio, she moved with her husband to Cambridge, Ohio, in 1977, to continue raising her children. With her childrearing responsibilities lessening, in middle age, Karen decided to additionally pursue a new passion, by acquiring more education and becoming a Medical Laboratory Technologist at Guernsey Memorial Hospital, Cambridge, in 1981, where she specialized in Microbiology. Always willing to try a new adventure, in 1989, Karen and Joseph pulled up stakes, and moved to Bartow, Florida. There she worked at a succession of hospitals in Polk County, starting with Winter Haven Hospital, progressing to Polk General Hospital, on to Bartow Memorial Hospital, and ultimately retiring from Bartow Regional Medical Center in 2005. Coming to Florida with ASCP-MLT and HEW-CLT certifications, Karen added certification by the American Medical Technologists in 1995, and found the members of the Florida Society very welcoming and their seminars extremely interesting and information-packed. She became a member of the board in 1995, holding offices of Recording Secretary (2000-2006), and Vice President (2006-2010) and was presented with multiple awards and recognitions. Finally, after being on the Board continuously from 1995, in 2015 she stepped down from the Board of Directors. But no longer being on the Board did not dampen her enthusiasm for AMT. From near the beginning of her membership, she was a perennial delegate to the National AMT Convention, until her battle with Alzheimer’s progressed, and she and her husband would look forward to the yearly travel to each new city for the convention. Her sharp mind, quick wit, and enduring nurturing personality will be missed by all who knew her. She requested that all wishing to make a contribution do it to the Alzheimer’s Organization for research against this horrible disease. ALZ.org.

The family of Karen Johnson Hurban created this Life Tributes page to make it easy to share your memories.

Bartow- Karen Johnson Hurban, of Bartow, Florida, died on May...

Send flowers to the Hurban family.