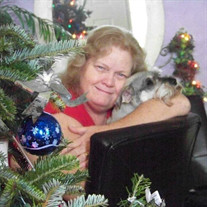 Joyce Hart Sosa, 62, went home to the Lord on October 10, 2021. Joyce was born February 3, 1959 in Homestead, Florida. She grew up in south Central Florida until the age of 14. In 1973, her family moved to Oahu, Hawaii where she spent her teenage and young adult years. In 1987, she moved to Lakeland, Florida where she met and fell in love with Fred Sosa. They soon married on January 24, 1988. They later welcomed a baby girl, Alyessa Sosa, in 1994. Joyce served in ministry with her husband for over 20 years collectively in which they served as youth pastors in local churches and provided ministry services through Youth For Christ at the Polk County Half Way House, Juvenile Detention Center, and Polk County Sheriff’s Boot Camp. She served with a smile, pouring into everything she did in the church and the teenagers in her care. She was lovingly referred to as “Momma Joyce” by the kids in the youth group. Joyce was a loving wife, mother, Mimi, sister, aunt, and friend. She will be remembered for so many things, including her fierce love, joy, creativity, and strength. She was preceded in death by: Eddie Lee Hart, father Lois Marie Hart, mother Robert Joseph Sosa, son Mark Steven Long II, nephew She is survived by: Husband, Fred Sosa Children: Alyessa Self and husband, Brandon Self Tiffany Anderson and husband, Justin Anderson (Little) Freddie Sosa Grandchildren: Israel Anderson Emma Robinson Siblings: Ron Hart and wife, Sarah Hart Susan Long Shirley Hart and husband, Jeff Bouley Leilani Hart Nieces and Nephews: Brian Butler and Diana Hart Melissa Lyles Morgan Robinson and Taryn Hart Falesha Creeley A Celebration of Life will be held for Joyce on Friday, October 15, 2021 at 7:00 p.m. at Fuel Church, 7355 U.S. Hwy 98 North, Lakeland, FL 33809, and will also be live streamed on https://youtube.com/c/FuelChurch

Joyce Hart Sosa, 62, went home to the Lord on October 10, 2021. Joyce was born February 3, 1959 in Homestead, Florida. She grew up in south Central Florida until the age of 14. In 1973, her family moved to Oahu, Hawaii where she spent her teenage... View Obituary & Service Information

The family of Joyce Hart Sosa created this Life Tributes page to make it easy to share your memories.

Send flowers to the Sosa family.