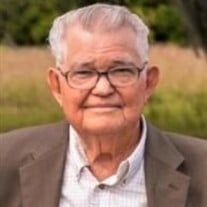 John Arthur Townsend (Dick) entered Heaven's Gates on January 29, 1922, at the age of 93. He is survived by his wife of 53 years, Frances Marlene (Johnson) Townsend, and his three sons, Charles Frank, Rodney Arthur, and John Kevin, grandchildren and relatives. He was preceded in death by his parents, John Thurston Townsend and Carrie Elizabeth Cochran, his brothers, Elvin, Casper, Elwood, Richard, David, and Loran; his sisters, Winifred Luckey, Nora Lee Harvard, and Charlotte Jane Smith. He is survived two sisters, Loretta Hyman and Cara Belle Pendrey. Dick was an acquired nickname during his early years. He was born January 16, 1929 in Ft. Meade, Florida. Most of his growing up years were spent in South Florida and the last forty plus years he had lived in Lakeland. He worked in the construction industry and eventually became a fireman at a small fire department in Naples. John served in the United States Army, being a veteran of the Korean War where he participated in the Chosen Reservoir Campaign. He received the United States Service Medal, the Korean Service Medal with one Bronze Service Star and the Bronze Star Medal.

The family of John A. "Dick" Townsend created this Life Tributes page to make it easy to share your memories.

Send flowers to the Townsend family.