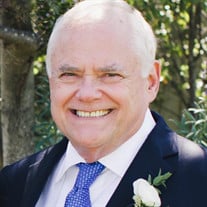 John Lewis Norris, 73, of Lakeland, Florida, passed peacefully with family by his side on Tuesday, November 16, 2021. A 20-year lung cancer survivor, he battled complications from COPD in recent years. John’s survivors include his daughters, Kate (Jake) Ketcham of Kennett Square, Pennsylvania, and Ann (Mike) McDonel of Raleigh, North Carolina; his siblings James “Dandy” (M’lou) Norris of Hot Springs, Arkansas, and Kathryn (Tommy) May of Pine Bluff, Arkansas; his three grandchildren, Teddy and Geneva Ketcham, and Charlie McDonel; and his former wife Pam (Wasson) Norris. He was born March 12, 1948, in Russellville, Arkansas, to the late Bill and Mary Kathryn (Robinson) Norris. Growing up in Pine Bluff, John enjoyed baseball, football, and adventure with the Boy Scouts, including a two-week canoe trip through the Canadian wilderness at age 12. He was awarded the rank of Eagle Scout and inducted into the Order of the Arrow. He graduated from Pine Bluff High School in 1966 and attended the University of Arkansas in Fayetteville. John and his family moved to Lakeland in 1990 to continue his career in the lumber industry. He loved the Florida Gators football team, cheeseburgers in paradise, zipping around town in his Mustang convertible, and embracing the relaxed Florida lifestyle in his retirement years. He enjoyed visiting his daughters “up North” for vacations and holidays. His sense of humor was unforgettable, as was his big smile. John was a well-respected member of the Sober Lunch Bunch and the local AA community. John’s family will privately celebrate his life, as he wished. Memorials may be made in his honor to the American Lung Association.

John Lewis Norris, 73, of Lakeland, Florida, passed peacefully with family by his side on Tuesday, November 16, 2021. A 20-year lung cancer survivor, he battled complications from COPD in recent years. John&#8217;s survivors include his daughters,... View Obituary & Service Information

The family of John Lewis Norris created this Life Tributes page to make it easy to share your memories.

Send flowers to the Norris family.