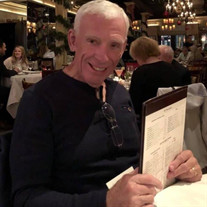 A beloved husband, father, papa, brother, uncle, cousin, and friend, John Robert Davies left this world on June 15, 2021. Born in Virginia on June 19, 1952 to John Daniel and Eva Joyce, John grew up in Tehachapi, California. He enlisted in the Navy in 1972 where he served on the USS Ranger as a Radioman during Vietnam. After serving 2 years of active duty, he returned to California and served 3 more years on active reserve. He began his lifelong career in PVC plastics in Bakersfield, California and continued in this field for 40+ years. He retired from Cantex in 2018. In 1982, John married the love of his life, Pam. His children Christopher, Jennifer, and Matthew were his pride and joy. The family moved to Lakeland from California in 1990. John devoted his life to his family and all the extracurricular activities his kids were involved in from coaching baseball at Highland City Ballpark to keeping the scorebook for the George Jenkins softball team. He took pride in encouraging young men and women that they could achieve their goals. He continued this same involvement with his grandchildren who lovingly called him Papa. He loved attending soccer games, Cub Scout events, softball games, etc. to support his grandchildren. John was also involved with the Honor Flights of Central Florida and Flight to Honor. He served as a guardian on three Honor Flights to Washington, D.C. He loved being able to share his time with other military heroes during these trips. John is preceded in death by his parents. John is survived by his loving wife Pam of 39 years, children Chris, Jenny (Jeremy), and Matt (Stephanie), grandchildren Peyton, Jackson, Mason, Sadie, Jordan, Blake, and Colton, siblings David, Gary, and Elizabeth, brother in law Gary, niece and nephew Michelle and Jeff, many cousins, and many friends who became family. John was an incredible friend to everyone he knew. From writing poems about people he met or knew to answering all the president questions at trivia to loving and supporting all of his friends and family, his presence in our lives will forever be missed. To honor our friend, a visitation is planned for Tuesday, June 22 from 10:00AM-11:00AM with a service following at Gentry-Morrison Southside, 1727 Bartow Rd, Lakeland 33801. In lieu of flowers, donations can be made to the GiveWell Community Foundation Flight to Honor, 1501 South Florida Avenue, Lakeland, FL 33803.

A beloved husband, father, papa, brother, uncle, cousin, and friend, John Robert Davies left this world on June 15, 2021. Born in Virginia on June 19, 1952 to John Daniel and Eva Joyce, John grew up in Tehachapi, California. He enlisted in the... View Obituary & Service Information

The family of John Robert Davies created this Life Tributes page to make it easy to share your memories.

Send flowers to the Davies family.