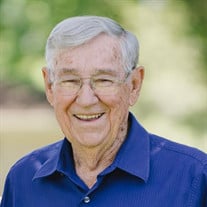 December 19, 2021 was a Great Day. It was a Great Sad Day as we mourned the passing of Joe Cummings Lee, 91, of Lakeland, Florida, but was also a Great Day of Celebration as he goes home to his Lord and Savior. His family and many, many friends celebrate the passing of Joe Cummings Lee, also known to family as Ol’ Buddy or Ol’ Buddy Grandad, to his heavenly home with his Lord and Savior on Sunday December 19, 2021. Born February 10, 1930 in Brotherton, Tennessee to parents Joe Beecher and Velma Freeman Lee, Joe grew up near Cookeville, Tennessee. After serving in the Air Force as an A1C during the Korean conflict, Joe moved to central Florida where he worked in the Office Supply industry as a designer, sales executive, and finally as owner and operator of Southern Office Equipment in Lakeland for more than 30 years. He served terms as president of the Florida Office Products Association and as District Governor of the National Office Products Association where he also served on the Board of Directors. Joe knew no stranger as he met all with an open smile, and anecdote, joke or story and his ever-present chuckle. He was an avid conversationalist and practiced the art daily. He enjoyed many pastimes including playing the guitar and signing his favorite country songs. He was an accomplished chef on the grill and taught many how to best cook steaks, barbeque ribs (no sauce, please) and slow cook pork butts. Joe was a member of the Power Squadron and a proficient captain of his Pacemaker yacht. Family vacations at the beaches of St. Armand’s key are fondly remembered. He loved airplanes and was a long time volunteer and participant in the Sun n Fun Aerospace Expo, the second largest experimental plane fly-in in the country, held each year in Lakeland. Joe was liked by all and loved by family and friends. As an active member of the community, Joe pledged time and service to many civic and charitable organizations including memberships in Kiwanis Club, Lakeland Masonic Lodge, a 50 year member where he held office and served as president, Scottish Rite Thirty-second Degree, Egypt Temple Shrine where he served as club director for the Shriners, and a long time member of Southside Baptist Church where he was a member of the choir and served on multiple committees through the years. Preceding Joe in passing are his wife of 64 years, Margaret Ellen Marie Vinson Lee and son Samuel Lee, parents Joe Beecher and Velma, sisters Gusta Lee Adams and Edith Lee, brothers Joe Frank, Harley, Johnny, Robert and Douglas. Joe is survived by daughter Debbie and husband Ernie Veale, daughter Donna and husband Rick Plank, and son Joe with wife Cristine, grandchildren Adam Veale with wife Jamie, Emily Plank, Alex Veale, Ryan Lee, Kyle Lee with wife Miranda, and Hayden Lee, great grandchildren Graeme and Reagan Veale, Olivia and Maverick Lee, Grayson Lee. He is also survived by brother Don. Visitation will held at 1pm Tuesday, December 28, 2021 at Southside Baptist Church, 5330 Lakeland Highlands Road, Lakeland, FL 33813, with services to follow at 2 PM. Internment will take place immediately after at the Oak Hill Burial Park. The family requests memorial donations in lieu of flowers be made to Good Shepherd Hospice, 3470 Lakeland Hills Blvd., Lakeland, FL 33805. Condolences may be sent to www.gentry-morrison.com

December 19, 2021 was a Great Day. It was a Great Sad Day as we mourned the passing of Joe Cummings Lee, 91, of Lakeland, Florida, but was also a Great Day of Celebration as he goes home to his Lord and Savior. His family and many, many friends... View Obituary & Service Information

The family of Joe Cummings Lee created this Life Tributes page to make it easy to share your memories.

Send flowers to the Lee family.