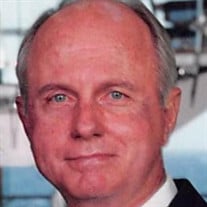 JESSIE “GLENN” WRIGHT, 76 QUALITY PETROLEUM Lakeland - JGW, 76, of Lakeland, Florida arrived in Heaven to be with his Lord and Savior on Saturday, April 4th, 2020, where he was looking forward to spending eternity. Glenn was born in Chipley, FL on June 16, 1943 to Leroy and Edna (Holley) Wright. He moved from Chipley to Polk County when he was two. His family settled in Winter Haven where he graduated from Winter Haven High School at age 16. He was raised with an extraordinarily strong work ethic - especially proud he learned to drive at the age of nine (9). In his early twenties Glenn had the opportunity to become a Texaco distributor and then an Amoco distributor with his partner at Quality Petroleum Corporation. He retired after 26 years from Quality Petroleum at the age of forty-five (45). We was a life long reader of all things business. He was most proud of his family, especially his daughters, Julie Lynn Mulkey and Holly Christine Smith as well as his grandchildren: Carson Rogers, Kylie Rogers and Lexi Mulkey. Nothing made him happier than being able to spend time together. Glenn was preceded in death by his parents, Leroy and Edna Wright; his son, Christopher Robin Wright; and his brother Wayne Wright. He is survived by his wife of almost 29 years, Michelle Wright; his daughters, Julie (Scott) and Holly (Tim), his grandchildren; his brothers, Leroy Wright and Harry (Sherry) Wright; his sister, Robbie Wilson, as well as his Mother and Father-in-Law, Mary and Ray Conover; his sisters-in-law Debbie (Walter) Nipper; Lisa Giesel (Duane McQuillen) , Stacy (Pat) Jacoby and many nieces and nephews. Glenn was generous to a fault-giving to others over himself. He was forgiving when most would not. He loved sharing his knowledge of life, his resources and as well as his many, many stories and experiences. Glenn also loved sharing about Jesus. He wanted to let others know how they could spend eternity with Jesus-not wanting any to be lost. Glenn’s Celebration of Life will be Saturday, June 6th at 11 am, with visitation at 10 am. It will be held at Medulla Baptist Church, 3930 Old Road 37, Lakeland. His arrangements have been handled by Gentry Morrison Southside. In lieu of flowers, Glenn loved Samaritan’s Purse (an evangelical Christian humanitarian aid organization that provides aid to people in physical need as a key part of its Christian missionary work.) P O Box 3000, Boone NC 28607.

JESSIE &#8220;GLENN&#8221; WRIGHT, 76 QUALITY PETROLEUM Lakeland - JGW, 76, of Lakeland, Florida arrived in Heaven to be with his Lord and Savior on Saturday, April 4th, 2020, where he was looking forward to spending eternity. Glenn was born... View Obituary & Service Information

The family of Jessie "Glenn" Wright created this Life Tributes page to make it easy to share your memories.

Send flowers to the Wright family.