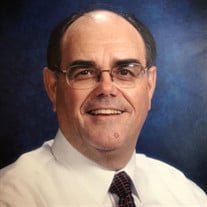 “For God is not unjust. He will not forget how hard you have worked for Him and how you have shown your love to Him by caring for others…” Hebrews 6:10 NLV. Jerry Phillip Jones, age 73, entered into his Heavenly rest on Friday, May 14, 2021. Jerry was a lifelong resident of Lakeland, Florida, and he was the loving son of A.B. and Agnes Jones, who proceeded him in death. Jerry is survived by his devoted wife of 54 years, Martha Reynolds Jones of Lakeland, Florida. His legacy of love and faithfulness is left to be continued on by his daughter, Michelle Olson (Bruce); his son, Phillip Jones (Patty); granddaughters Hannah Larson and Lauren Jones; and grandson Jacob Jones, all from Lakeland, Florida. He is proceeded in death by his brother, Michael Jones, and survived by his sister, Luvenia Baxley, of Inverness, Florida. Jerry was a former member of Lake Wire Church of God and a current member of Victory Church. Jerry gave his life to the ministry of Christian education as a Sunday School teacher and superintendent, Vacation Bible School director, and Children’s Pastor. He devoted 22 years of his professional career to serving the Lakeland community as the administrator of Lake Wire Christian Academy and Excel Christian Academy. His passion for children’s ministry was evident through his life’s dedication to caring for students, educating them with a standard of excellence, and leading them to develop a personal faith in our Lord. Jerry is known for kindness, generosity, and selfless acts of service to others. For over 54 years, Jerry walked hand-in-hand with his high school sweetheart and bride, Martha. Together, they built a humble life that they loved, serving the kingdom of God, and raising their cherished family. For Jerry, his grandchildren were his greatest joy, and he was happiest when his family gathered together for meals around the dinner table. Throughout his life, his love for people and compassionate heart allowed him to put into action one of his favorite scriptures, the Prayer of Jabez. His territory was indeed enlarged by those whom he mentored and spiritually adopted. Jerry treasured the fellowship of those friends who became unofficial members of the family. Jerry loved his vacation adventures, and he found a home at both the beach and Walt Disney World. Outside of God and family, Jerry’s defining passion was the Florida Gators. Whenever the Gators were playing, he gave them his full attention. He believed that it was “Always great to be a Florida Gator” and he bled orange and blue. A service to celebrate the life of Jerry Jones will be held at 6:00pm on Friday, May 21, 2021 at Victory Church in Lakeland, Florida. The family will receive friends and family during the visitation time prior to the service, from 5:00pm-6:00pm, as well as after the service. The family would love for anyone who can to attend in person, however, the service will also be live streamed at the Victory Church Lakeland Florida Facebook page.

&#8220;For God is not unjust. He will not forget how hard you have worked for Him and how you have shown your love to Him by caring for others&#8230;&#8221; Hebrews 6:10 NLV. Jerry Phillip Jones, age 73, entered into his Heavenly rest on Friday,... View Obituary & Service Information

The family of Jerry Phillip Jones created this Life Tributes page to make it easy to share your memories.

“For God is not unjust. He will not forget how hard you have...

Send flowers to the Jones family.