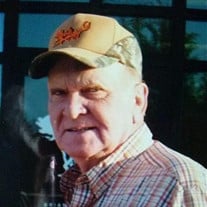 James “Bud” Robinson, 78, of Lakeland, FL, passed away November 13, 2021 surrounded by his loving family. James was born on March 7, 1943 in Marshall North Carolina to Unive (Taylor) and James Robinson. James lived in North Carolina until 1959 when his family relocated to Lakeland, Florida. James worked for his father at Robinson Foundation from 1962-1970 at which time he took over the company until his retirement in 2008. He loved to fish and hog hunt. When he wasn’t on the water or in the woods you could find him spending time with his children and grandchildren. James had a love for cars owning many antique cars and trucks throughout the years. James was survived by his 4 children: Lisa, Darrel, Chris, and Emily, 13 grandchildren: Jason, Jenny, Justin, Stephan, Michael, Austin, Garrett, Annabeth, Abigail, Kaylee, Hayden, Kayley and Malachi, 10 great grandchildren, 1 great-great grandchild and his 3 sibling Clara, Louise and Tammy. Along with many other people who cared for him deeply. He was preceded in death by both his parents, two children: Janet and Jimmy and a brother Ricky. Visitation at Gentry-Morrison Southside will be held on Thursday, November 18th from 11 am – 1 pm, followed by a graveside service at Oakhill Burial Park at 1:30 pm. The family will have friends and family immediately following at 4731 Knights Station Rd, Lakeland, FL.

The family of James "Bud" Robinson created this Life Tributes page to make it easy to share your memories.

Send flowers to the Robinson family.