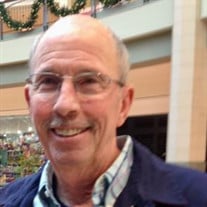 Howard Barrett Marshall, 77, passed away on February 25, 2022. Howard was born December 11, 1944 in Winter Haven, Florida. Howard graduated from Lakeland High School, class of 1962. He earned a bachelors and masters degree from the University of Florida in engineering. He later earned a masters degree in accounting from the University of Texas Arlington. Howard worked for a number of engineering firms, having as his projects simulators for the C130, Vertical Take Off and Landing aircraft as well as the simulator for the space shuttle. After retiring from engineering he began a teaching career at Polk State College Collegiate High School. Howard water skied with his siblings at a young age -they were dubbed the Aqua Brats. Howard skied competitively, usually placing well. He skied at the New York World's Fair. Howard made sure his children, nieces and nephews learned to water ski. In recent years Howard was an avid tennis player. He also took every opportunity to show his skills on the dance floor. Howard was predeceased by his parents Robert D.and Mary Louise Marshall; his brother, Robert D. Marshall, Jr.; his nephew, Robert D. Marshall, III. Howard is survived by his son Jon (Julie); daughter, Courtney; Grandson Zach Buster; granddaughter, Amanda Buster all of Virginia; brother David Marshall(Ann) of Lakeland, FL; sisters Barbara Baumer (Fred), South Bend, IN and Mary Kay May of Tallahassee, FL; as well as several nieces and nephews. Memorial Service will be Tuesday, March 8 at 11am at the Chapel at First Presbyterian Church, Lakeland. In lieu of flowers, the family requests donations be made to the CHS Eagle Fund through the Polk State College Foundation, which supports Lakeland’s Collegiate High School, in memory of Howard Marshall and his contributions. Donations may be made online: polk.edu/eaglefund or mailed to: Polk State College Foundation 999 Ave H NE Winter Haven, FL 33881 (noting donations are for the CHS Eagle Fund in memory of Howard Marshall)

The family of Howard Barrett Marshall created this Life Tributes page to make it easy to share your memories.

Send flowers to the Marshall family.