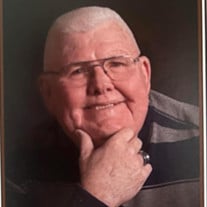 Homer Eugene Gartrell, 85, of Lakeland, FL passed away peacefully on Thursday March 24th 2022. Homer was born in Leesville, Ohio but at the age of one his family moved to Lakeland, FL. It was in Lakeland where he met the love of his life Barbara. Their first formal introduction was when Homer gave up his bus seat to Barbara after she became ill after school in 1953. While this was the first time Homer formally showed Barbara his caring and generosity it would not be his last. Homer soon graduated from Lakeland High School in 1954 where he made lots of lasting memories playing football and making friends. After graduating high school he went to work for the family business, Polk County Tile. In 1956, Homer married Barbara and began their 65 years of marriage. Homer laid tile full time through 1966. It was a relationship with a former teacher and principal, Earl Stokes, who mentored and eventually led Homer to pursue a new career in teaching. In 1966 Homer began the process many were not strong enough or willing to take, working full time and going to school at nights to work towards his teaching degree. Prior to obtaining his degree he would face some of life’s highest highs and lowest of lows. In 1969, Barbara and Homer brought into the family their first son, Philip. Later in 1970 they would also bring in Elizabeth and Peter “the twins”, however due to being premature they did not survive much past their births. The loss of the twins was devastating but this incident created a stronger bond between Homer and Barbara. In 1971 Homer had the opportunity to begin teaching due to teacher shortages at Seth McKeel Junior High prior to earning his degree. Soon after beginning his teaching career Homer earned his Bachelor of Science in Education from the University of South Florida in 1972. Anyone who knew Homer, knew the quests of knowledge never stopped, he pursued and earned his Masters in Education from Rollins College in 1975. During his time at Seth McKeel, Homer coached football, golf, and led a science club. He brought science into many children’s lives and took them to almost every central Florida theme park, which is still talked about by those science club students. Jump forward to 1978. The biggest surprise, a gift from God, Lydia. In October of 1978 Lydia became daddy’s little girl. While Homer and Barbara had embraced the sense of life and God, now having a girl and boy 9 years apart put a whole new perspective on being parents. Looking back Homer didn’t mind change, he embraced it. Soon after Lydia’s birth he seized an opportunity to begin teaching at Lake Gibson High School in 1980 as a biology teacher. Soon after his transition to Lake Gibson High School, Homer was also given the opportunity to direct the Junior Citrus Golf Program which included a golf tournament every Monday during the summer months at Cleveland Heights for kids ages 6-18. The Citrus Golf program concluded each year with a 54-hole tournament that spanned across: Lone Palm GC, Imperial Lakes CC, and Cleveland Heights GC. This tournament would close early each year with waiting lists and would provide stepping stones for many PGA and LPGA professionals. Homer stayed busy over the next 23 years being a husband and father. While Homer enjoyed playing golf with his friends every Saturday morning at Cleveland Heights, he began to transition from playing golf to coaching golf to both Philip and Lydia. Because of his unselfishness both Philip and Lydia were able to go to college, play golf, and earn their degrees. After years of hard work and dedication both Barbara and Homer retired in 2003. Beginning in 2003 Homer began the next chapter of his journey. Homer traveled around the country pulling a camper and staying as long or as short as he wanted. Retirement also provided him time to spend with his new grandchildren, Amanda (1998), Haley (2003), Connor (2007), and Hunter (2010). Fun, work, and birthday’s began to catch up to Homer, but his drive never stopped. Though Homer may have not been physically able to do a lot he found a way to connect and minister God’s word through Facebook. Through Facebook Homer was able to connect to friends, former students, fellow brothers and sisters of Christ, to minister and share his faith in God and throw in very dry jokes, his specialty. Homer was a member of Bethel Baptist Church. He is survived by his wife Barbara, his son Philip and Sheila (wife), his daughter Lydia and David (husband) all of Lakeland, FL, and his four grandchildren, Amanda Gartrell, Haley Gartrell, Connor Facey, Hunter Facey. Visitation will be held at Bethel Baptist Church beginning at 11am followed by a brief service on Monday, March 28th, 2022. Following the service, the family will hold a private graveside service. The family asks in lieu of flowers donations be made in Homer’s name to Bethel Baptist Church.

Homer Eugene Gartrell, 85, of Lakeland, FL passed away peacefully on Thursday March 24th 2022. Homer was born in Leesville, Ohio but at the age of one his family moved to Lakeland, FL. It was in Lakeland where he met the love of his life... View Obituary & Service Information

The family of Homer Gartrell created this Life Tributes page to make it easy to share your memories.

Send flowers to the Gartrell family.