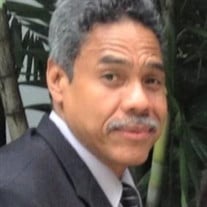 Obituary for Hermel “Hil” De Rosario On February 25, 2022, Hermel Del Rosario, a great and extraordinary man, went to be with His beloved Jesus at the age of 63. Hermel was born in the Republic of Panama, son of Hilda Camargo and Jose E. Del Rosario, he is survived by his wife of 33 years, Leslie, two sisters, Cira de Nunez and Neka Del Rosario, a brother, Everardo Del Rosario, and many nieces and nephews. He was a loving and caring husband, and his wife Leslie says of him, “He was my friend and the love of my life. I will dearly miss him until we see each other again!” Wherever he went, Hermel’s captivating smile made people ask, “What is it that you have?” and he would reply, “Jesus!” Because of his smile, Hermel brought comfort and encouragement, and often led people to Jesus. In fact, on three separate occasions, he was followed by three major league baseball players, and led them to the Lord. Hermel, also known as Hil, Pastor Hil, and Uncle Hil, impacted many people’s lives, including Leslie’s family, his own family, and countless friends. As a young Christian, at the age of 20, he made it his life’s purpose to touch as many lives as possible with the message of the cross. A month or so after his conversion, with his innate leadership quality, Hil went to the church’s prayer room, gathered those who received Christ around the same time he did, and prayed and encouraged them to go on buses to share the Gospel and not to be ashamed. The efforts of himself and the others brought great growth to the church. They were called “Trepa Buses,” or, “Those who Go on Buses.” Prior to coming to the United States, Hil traveled as an evangelist, where he preached and held evangelistic crusades in churches, stadiums, and youth and children outreaches in several Latin American countries. With a big smile, and, at times with teary eyes, he often would share how radically the Lord Jesus Christ delivered him from gangs, alcohol, and drugs. Hil dedicated his life to “spreading the gospel of Jesus Christ,” starting in Panama, then Costa Rica, and many other countries around the world. In 1987, as a result of an invitation to preach in Chicago at Pastor Cruz’s church, Hermel began reaching out to drug addicts and gang members and leading them to the Lord. The Lord also led him to California, where he worked in Lynwood Teen Challenge, and his ministry continued to the inner city of Lakeland, Florida. With his passion to help those who were hurting, Hil joined Larry Mitchell at New Life Outreach, a drug regeneration program in Lakeland, and there he served as the director of the program for over ten years. Many men and families’ lives were touched, and changed, for the glory of God. Hermel, an ordained minister of the Assemblies of God, while serving in New Life Outreach, also was involved in the community, prison ministry, and, during the Assemblies of God Decade of Harvest, along with his wife, Leslie, they planted a Hispanic church in the City of Lakeland. In 1999, Hermel, with his wife Leslie, accepted the call of God to become missionaries with the Assemblies of God, and served in Cape Town, South Africa, Mexico, and Panama, where thousands of people prayed to receive Christ as their Savior. His ministry extended to helping plant churches, build and remodel three churches in Mexico, rebuild a church close to the Darien jungle in Panama, and work with children and youth outreaches, gangs, and prison ministry. With the help of Mike Tedder, former Senior Pastor of Bartow First Assembly, and Wayne Blackburn, Senior Pastor of Victory Church, Hermel was able to purchase a strip mall in South Africa, with two acres of land for a Teen Challenge ministry, which is currently self-sustained. In conjunction with former missionary David Betzer, they were able to launch the Book of Hope for the continent of Africa. Other works that Hermel was instrumental in were organizing leadership training, marriage seminars, medical clinics, and more, using all available tools to reach the lost for Christ’s sake. Hil always looked for opportunities to share the gospel. One of his favorite verses in the Bible was Joshua 1:9: “All that I have done and accomplished is for the glory of God.” Hil, we will miss your encouragement, care, and your beautiful smile! A memorial service honoring missionary Hermel “Hil” Del Rosario will be on Thursday, March 17, 10:30 AM, at Victory Church, 1401 Griffin Road, Lakeland, Florida, 33810. A live video stream of the service will be available. For details, call (863) 859-6000.

Obituary for Hermel &#8220;Hil&#8221; De Rosario On February 25, 2022, Hermel Del Rosario, a great and extraordinary man, went to be with His beloved Jesus at the age of 63. Hermel was born in the Republic of Panama, son of Hilda Camargo and... View Obituary & Service Information

The family of Hermel I. Del Rosario created this Life Tributes page to make it easy to share your memories.