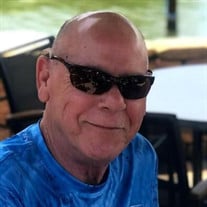 Henry David Severance, 61, passed away at Good Shepherd Hospice in Lakeland on October 15, 2021, with his wife Angela by his side. Henry was born on January 17, 1960 to parents Robert and Angeline on military base in Heidelberg, Germany. He was 3 years old when his father completed his time with the service and moved to Lakeland, where he remained for the rest of his life. He was a member of Pine Grove Baptist Church in Mulberry, of which his grandfather, Grady Weeks, was an overseeing elder when the church was founded. Henry was employed with Mosaic for 43 years, having starting with the company his senior year of high school. He was an electrician instrumentation technician. He was respected and loved by so many colleagues and co-workers. Henry was a huge fan of the Tampa Bay Buccaneers and Tampa Bay Rays. He also enjoyed Nascar and had a collection of guitars that he loved to play. Henry loved being outside more than anything. He enjoyed fishing and hunting and anything involving the outdoors or nature. He took great joy in feeding his birds and squirrels. Henry was known to be a giver with a big heart. He was always giving to anyone who needed help, in any way. He has many friends and family that loved and adored him, and he will be greatly missed. Henry is survived by his loving wife of 32 years, Angela. He is also survived by his mother, Angeline Lewis; sisters Trilby Severance, Bobbie Sue Sessoms (Milton), Claudia (Robbie) Powell, and Sandy Grainger (Stanley); Sibling in Laws Luke McCoy, Jr. (Linda), Terry McCoy, Janet Davis (Lowell), Gary McCoy, and Jennifer Troughton (Jason); and numerous nieces and nephews. He is preceded in death by his father Robert Severance and stepfather, Claude Patrick Lewis. A family memorial service for Henry will be held in North Carolina. In lieu of flowers, the family has requested memorial contributions in Henry’s name be made to Good Shepherd Hospice in Lakeland.

Henry David Severance, 61, passed away at Good Shepherd Hospice in Lakeland on October 15, 2021, with his wife Angela by his side. Henry was born on January 17, 1960 to parents Robert and Angeline on military base in Heidelberg, Germany. He... View Obituary & Service Information

The family of Henry David Severance created this Life Tributes page to make it easy to share your memories.

Send flowers to the Severance family.