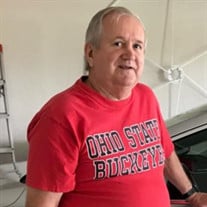 With great sorrow we announce on the morning of June 17, 2020 a wonderful man Harold George Knupp, 76, passed on to the afterlife in his sleep after recently getting diagnosed with a rare aggressive form of cancer. Harold was born in Youngstown, Ohio June 5th, 1944 and resided in Haines City, Florida. Harold was a one of a kind man who cared endlessly about his family. He was a very strong willed, caring, and understanding man. Despite his hard headedness and being stubborn he was genuinely the most loving man. He enjoyed country music, cars, and traveling. Harold was a graduate of Hubbard High School. He retired as an inspector at General Motors in 2000 with 30yrs in Lordstown, Ohio. He was also a veteran of the United States Army where he was stationed in Korea. He was a hard worker and that trait carried on to everything he did in life. He moved to Davenport, FL in 2000, then to Haines City, FL in 2015. Harold leaves behind a daughter, Lisa Klug of Haines City, FL; grand daughter, Ashley Klug (Tommy Vargo); two great grandchildren, Thomas Vargo III and Joleah Vargo of Hubbard, Ohio; his four sisters, Doris (Robert) Dama of Austintown, Ohio; Marilyn Morgan, Jean Ayers, and Joyce (Victor) Ruminski all of Hubbard, Ohio; his brothers, Allen (Dorothy)Knupp of Hubbard, Ohio, Richard (Cindy) Knupp of Columbus, Ohio; and many other relatives. He is proceeded in death by his parents, Frances and Harold Knupp; and his son-in-law, Scott Klug; brother-in-law, Dewey Morgan, and brother-in-law Robert Ayers. He will be greatly missed by many and his memory and life lessons will live on forever. In lieu of flowers, Harold would have wanted donations to be made to St. Judes Children Hospital or the National Cancer Society.

With great sorrow we announce on the morning of June 17, 2020 a wonderful man Harold George Knupp, 76, passed on to the afterlife in his sleep after recently getting diagnosed with a rare aggressive form of cancer. Harold was born in Youngstown,... View Obituary & Service Information

The family of Harold G. Knupp created this Life Tributes page to make it easy to share your memories.

Send flowers to the Knupp family.