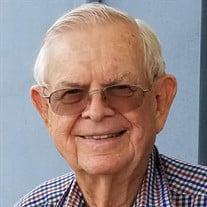 Gilroy Gilliam (Gil) Walton passed away on Wednesday, February 17, 2021 at the age of 95 due to natural causes. Gil was born on October 23, 1925 in Live Oak, Florida to Gilroy Gilliam Walton Sr. and Billie Baker Walton. He was baptized as an infant by his Grandfather, Rev. Dandridge F. Walton, a Methodist minister. Gil graduated with honors from Suwannee High School in Live Oak. He was active there as a Boy Scout, being one of the first scouts there to attain the rank of Eagle Scout. At the age of 17, Gil attended Emory at Oxford College in Covington, Georgia as a pre-med student. At 18, Gil volunteered and joined the U.S. Naval Reserve and was stationed on Guam during World War II. At the end of the war, he was assigned independent sea duty as a pharmacist mate 2/C on a Naval Minesweeper in occupied Japan. After being discharged from the Navy, Gil attended Emory University in Atlanta, Georgia graduating with a business administration degree, with distinction. He was employed by Crawford and Co. of Atlanta as a claims adjuster and office manager for 38 years. Gil married his beloved wife, Lois Wainwright on June 20, 1964 in Winter Haven, Florida. As a family man, he continued scout work serving as an assistant Scoutmaster to a Cub Scout Troup. He loved to hunt and was an AVID fisherman. His other hobbies were lawn and gardening, orchids, raising plants, and refinishing furniture. He also enjoyed family camping and traveled extensively. Gil is survived by his loving wife Lois; his three children, John Walton (Debi), Janet Walton, and Ellen Walton Casey (Bill); four grandchildren, Rebecca Walton Brown (Joseph), James Walton, William Casey, and Harry Casey, one great grandchild, Erika Brown, sister-in-law, Beverly Story, nephew, Tim Story (Virgie) and niece, Lisa Story. A celebration of his life for family and friends will be held at the Gentry-Morrison Funeral Home, Southside Chapel, on Thursday, February 25, 2021 at 1:00 pm. In lieu of flowers, the family requests any remembrances be made to the First United Methodist Church of Lakeland, or to the charity of their choice. Interment will be a private ceremony with the family at the Florida National Cemetery in Bushnell, Florida.

Gilroy Gilliam (Gil) Walton passed away on Wednesday, February 17, 2021 at the age of 95 due to natural causes. Gil was born on October 23, 1925 in Live Oak, Florida to Gilroy Gilliam Walton Sr. and Billie Baker Walton. He was baptized as an... View Obituary & Service Information

The family of Gilroy "Gil" Gilliam Walton created this Life Tributes page to make it easy to share your memories.

Send flowers to the Walton family.